Marah Louw chats to Malebo Sephodi about writing her memoir for the new Gautrain Virtual Bookclub
More about the book! 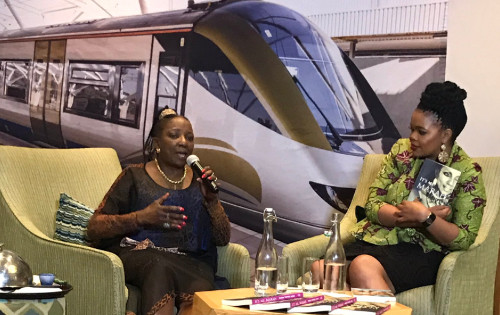 Marah Louw chatted to Malebo Sephodi about her memoir It’s Me, Marah as part of the new Gautrain Virtual Bookclub.

Louw says when she first met her publisher, Thabiso Mahlape of BlackBird Books, she came into the meeting dragging a suitcase filled with all her press clippings.

‘Most of my life was in that suitcase. When I was younger, getting into show business, journalists would write fantastic stories. They used to review your shows. They would write whether it was good or bad, but if it was criticism it was constructive criticism, it was not destructive.’

But Louw says there are some memories of her life she will never forget, like the first time she had fish and chips when she was six years old.

‘How you can forget that? I came from Bompas, and I had never seen fish and chips before! I can still taste it. It was the best taste I’ve ever tasted in my life!’

Getting ready to launch the Gautrain Virtual Bookclub at the Radisson Blu Gautrain Hotel this afternoon #GautrainReads pic.twitter.com/D5PRHKNAlm

Marah Louw discusses her book "It's Me Marah" at the launch of #GautrainReads. "I know my story. I'm living it" #ItsMeMarah pic.twitter.com/4uwkht2jkO

"It's always been Marah with an 'H'". @MarahLouw gives a background on her book "It's Me Marah" at the launch of #GautrainReads #ItsMeMarah pic.twitter.com/DLaC64difj

"Reading rejuvenates the brain. Well done Gautrain for coming up with this initiative" – @MarahLouw at the launch of #GautrainReads pic.twitter.com/zkPUirNT4U