Madam and Eve: The Guptas Ate My Homework is now available at leading bookstores!
More about the book! 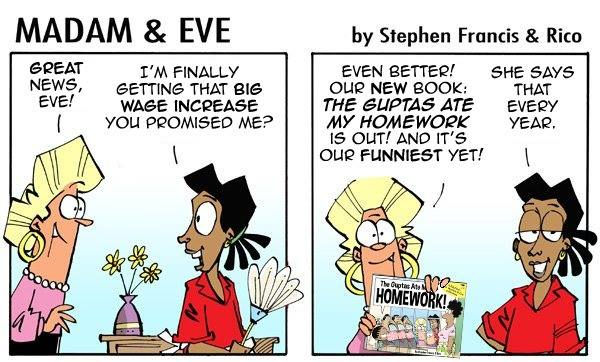 Madam & Eve: The Guptas Ate My Homework is out now from Jacana Media.

After 25 years Madam & Eve is still going strong. The duo is back with more hilarious cartoons reflecting on another year of the crazy rollercoaster that is daily life and politics in South Africa.

‘Has won the hearts of millions!’ – Mail & Guardian

Stephen Francis is the writing half of the Madam & Eve team. Born in the United States in 1949, Francis moved to South Africa in 1988. In 1992, witnessing the interesting and often funny dynamic between his South African mother-in-law and her domestic housekeeper, he conceptualised the Madam & Eve strip. Stephen Francis is also an award-winning scriptwriter, and radio and TV personality.

Rico Schacherl forms the other half of the creative team – as illustrator. Born in Austria in 1966, Rico has lived and worked in Johannesburg for most of his life and has been drawing cartoons ever since he was old enough to hold a pencil. Besides his work on Madam & Eve, Rico also produces illustrations and editorial cartoons for a wide range of other publications.