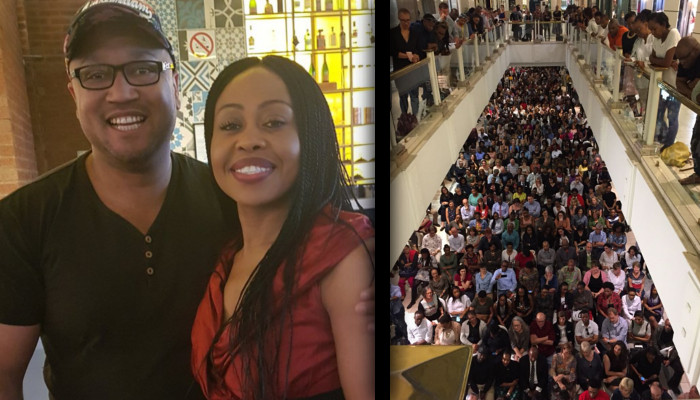 There were record numbers of people buying books at the launch of Redi Tlhabi’s new book Khwezi: The Remarkable Story of Fezekile Ntsukela Kuzwayo last night.

The response to the event at Hyde Park Exclusive Books was so overwhelming that the launch was moved to an open area in the mall downstairs. Over 700 people attended the launch, and over 400 books were sold – virtually unheard of for a local author.

The book has become an overnight bestseller and is about to go into its third print run after just two weeks on the shelves.

Tlhabi was in conversation with Eusebius McKaiser about the book (video below), which gives voice to the late Fezekile Ntsukela Kuzwayo, better known as Khwezi, the woman who accused Jacob Zuma of rape in 2006 and was vilified as a result.

Tlhabi is donating all proceeds from the book to Kuzwayo’s family.

This is for a book launch (book about the life of Zuma's alleged rape victim; now late) in Johannesburg. Yo. #Khwezi Images: @Eusebius pic.twitter.com/IlcfF8WyzV

INSANE energy!!! This is the view from the front…. magod! #Khwezi pic.twitter.com/9atfNMCyZr

Redi Tlhabi is STILL signing books.. as I type! Legendary Bruce Fordyce waited 2 hours and 30 minutes for his book to be signed #Khwezi pic.twitter.com/6vfyKSdjDT

Here at the launch of #Khwezi. Congratulations to Redi, but also we thank her for giving Fezi a voice. We are here to listen even to her 🙏🏿 pic.twitter.com/6WazGTvNHy

90 minutes of JUST signing books and the queue is not getting shorter!!! #Khwezi pic.twitter.com/dd9ACwmhyj

Ps Redi Tlhabi is not keeping any of the money she is making from this book. All of it is going to Fezekile's family. #Khwezi pic.twitter.com/ZtjLMlV1nE

#Khwezi – book launch of the year. The hacker is probably lurking in the crowe somewhere 🤣🤣🤣 pic.twitter.com/POT5kCHFfu

Hyde Park is shook! Too packed for words, books are flying off the tables like they're being given for free. Wow! 🙌🏾🇿🇦✊🏾#RediTlhabi #Khwezi pic.twitter.com/jaWqvrbKNV