Join Ryan Blumenthal for the virtual book launch of Autopsy: Life in the Trenches With a Forensic Pathologist in Africa (26 Aug)
More about the book! 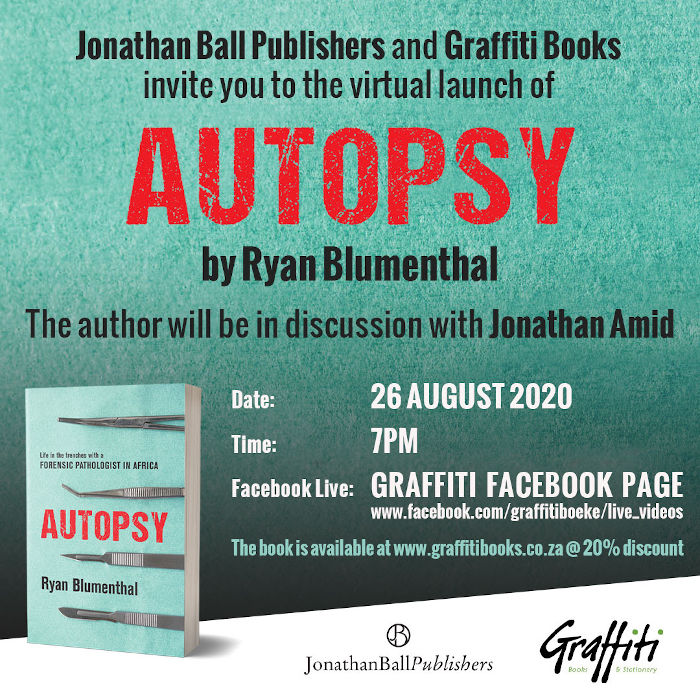 Don’t miss the virtual book launch of Autopsy: Life in the Trenches With a Forensic Pathologist in Africa by Ryan Blumenthal.

Blumenthal will be in conversation with Jonathan Amid.

As a medical detective of the modern world, forensic pathologist Ryan Blumenthal’s chief goal is to bring perpetrators to justice. He has performed thousands of autopsies, which have helped bring numerous criminals to book. In Autopsy he covers the hard lessons learnt as a rookie pathologist, as well as some of the most unusual cases he’s encountered.

During his career, for example, he has dealt with high-profile deaths, mass disasters, death by lightning and people killed by African wildlife. Blumenthal takes the reader behind the scenes at the mortuary, describing a typical autopsy and the instruments of the trade. He also shares a few trade secrets, like how to establish when a suicide is more likely to be a homicide.

Out now from Jonathan Ball Publishers!