Join Mukuka Chipanta in Cape Town for the launch of his new novel Five Nights Before the Summit, with Ekow Duker (24 Oct) 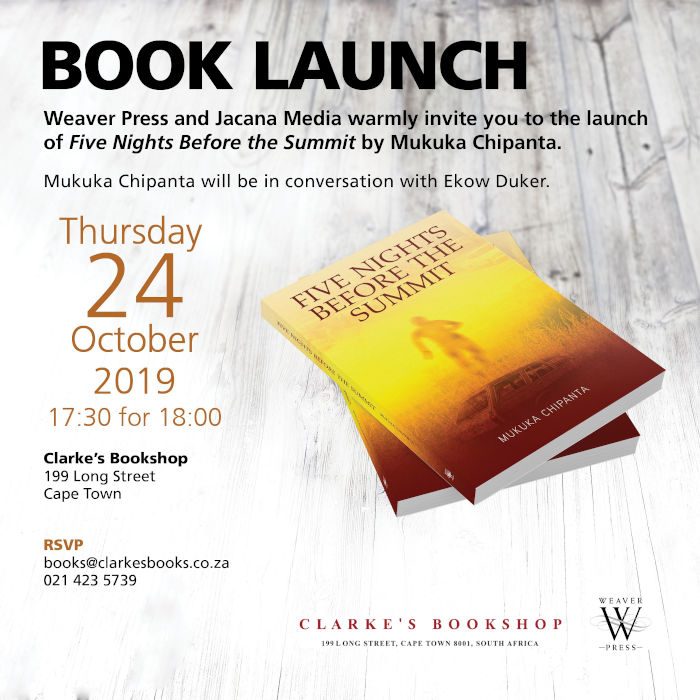 Weaver Press and Jacana Media invite you to the launch of Five Nights Before the Summit by Mukuka Chipanta.

Five Nights Before the Summit offers a rich tapestry of context and character in a story that engages the reader in the pursuit of justice.

Chipanta will be in conversation with Ekow Duker at the launch.

It is 1979. The first Commonwealth Heads of Government Summit on African soil is due to take place in Zambia, graced by Queen Elizabeth herself. Barely a week before this much anticipated event, a white British couple, Henry and Laura Hinckley, are brutally killed on their farm on the outskirts of the capital city, Lusaka. The unknown perpetrators are at large, their motive unclear.

Fearing a media backlash, the British government applies pressure on the Zambian authorities to bring the culprits to book, threatening to cancel the Queen’s trip altogether a move that would result in huge embarrassment for the Zambian government.

Detective Maxwell Chanda, head of the Special Crimes Investigative Unit, is the man tasked with leading the investigation. He is a wise, steady hand, but will he be able to piece together the seemingly disparate evidence in just five days? Will he be able to hold firm under the intense political pressure which insists on putting expediency above accuracy?