New book alert! Inside the Belly of the Beast: The REAL Bosasa Story by Angelo Agrizzi 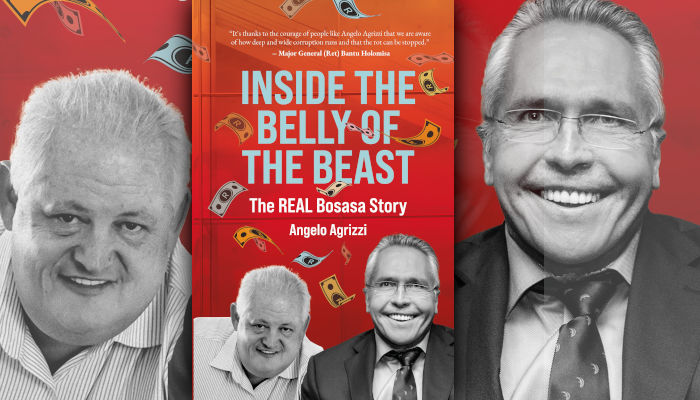 Inside the Belly of the Beast: The REAL Bosasa Story by Angelo Agrizzi is out now from Truth Be Told Publishers.

Inside the Belly of The Beast is the mindblowing confession of a man who, page by page, exposes the intimate fraudulent workings of a company, founded on deep deception, under the cult-like leadership of the Master himself, Gavin Watson.

In January 2019, Agrizzi made his ﬁrst appearance to testify at the ongoing Zondo Commission.

Having been intimately involved with Bosasa since its inception, having worked and travelled side by side with Watson, and having witnessed his unique style of bribery and corruption during this period – something that most certainly assisted in bringing South Africa to her knees during Zuma’s rule – Agrizzi is one of few people with a ﬁrst hand account of what really happened behind the closed doors of Bosasa.

At the time of going to print, Agrizzi had been deemed as a flight risk by the state, denied bail, incarcerated and later hospitalised.

‘There can be no faith in government if our highest oﬃces are excused from scrutiny – they should be setting the example of transparency.’ – Edward Snowden

At a time where corruption has become the most urgent scourge to address, Inside The Belly of the Beast plays a hugely important role in further exposing the corporate and political crimes
that redirected billions meant for the citizens of this country. The public is owed this information since much of it directly relates to the criminal pillaging of state coﬀers.

For many South Africans, the name ‘Angelo Agrizzi’ burst into public consciousness when, in late January 2019, a racist audio clip of Agrizzi using the K-word a number of times was played
at the Zondo Commission. Many of us were sickened to the core. But if publishers only represented writers who they liked and agreed with, the world would have a very barren lists of books.

Agrizzi owned up to his racist outburst at the Zondo Commission and subsequently paid a R200 000 ﬁne to the Barney Mokgatle Foundation. There are many racists in this country who hide
behind boardroom doors and utter their bigotry at braais and cocktail parties. They just haven’t been exposed yet.

Inside the Belly of the Beast is far bigger than the man. Agrizzi has written a hugely important and compelling memoir, tracking almost two decades of bribery, politicking and corruption that
he witnessed and was part of, as the COO of Bosasa, under the leadership of Gavin Watson.

And who are we to cast judgment on the man when we are also ﬂawed?

Over time many of us have grown to respect Agrizzi for his courage as a whistleblower especially in the light of him turning down Gavin Watson’s oﬀer of R50 million, to procure his silence. Some of our leaders and institutions have been bought for far less.

Truth Be Told Publishing salutes the whistleblowers of this world – the Snowdens, the Assanges, the Channings, the Agrizzis and Magaqas – courageous men and women who have been exiled,
murdered, besmirched and imprisoned for risking their lives for the truth. At the time of going to print, Agrizzi had been deemed as a ﬂight risk by the state, denied bail, incarcerated and later
hospitalised.

South Africa needs to heal from the brutal legacies of apartheid as well as from our corrupted ‘democracy’. More than ever before, we are at a time when the country’s dispossessed should
be receiving the long overdue blessings of freedom and prosperity. As a nation, we thirst for a new moral compass.

Don’t miss the launch of Soft Magic, the debut collection of prose and poetry from Malawian writer Upile Chisala, at The Book Lounge (30 May)