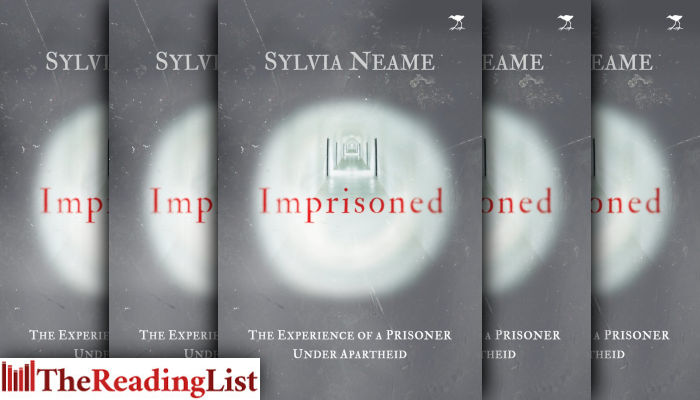 Imprisoned: The Experience of a Prisoner Under Apartheid by Sylvia Neame is coming soon from Jacana Media.

This extraordinary account of imprisonment shows with exacting clarity the awful injustices of the system.

Neame, activist against apartheid and racism and by profession a historian (see the three-volume The Congress Movement, HSRC Press, 2015), has not written a classical historical memoir. Rather, this book is a highly personal account, written in an original style.

At the same time, Imprisoned casts a particularly sharp light on the unfolding of a police-dominated apartheid system in the 1960s. The author incorporates some of her experiences in prisons and police stations around the country, including the fabricated trial she faced while imprisoned in Port Elizabeth, one of the many such trials which took place in the Eastern Cape. But her focus is on Barberton Prison.

Here she was imprisoned together with a small number of other white women political prisoners, most of whom had stood trial and been sentenced in Johannesburg in 1964-65 for membership of an illegal organisation, the Communist Party. It is a little known story. Not even the progressive party MP Helen Suzman found her way here.

Barberton Prison, a maximum security prison, part of a farm jail complex in the eastern part of what was then known as the Transvaal province, was far from any urban centre. The women were kept in a small space at one end of the prison in extreme isolation under a regime of what can only be called psychological warfare, carried out on the instructions of the ever more powerful (and corrupt) security apparatus.

A key concern for the author were the mental and psychological symptoms that emerged in herself and her fellow prisoners and the steps they took to maintain their sanity.

It is a narrative partly based on diary entries, written in a minute hand on tissue paper, which escaped the eye of the authorities. Following Neame’s release in April 1967 – she had been altogether incarcerated for some three years – she produced a full script in the space of two or three months. The result is immediacy, spontaneity, authenticity; a story full of searing detail.

Imprisoned is also full of a fighting spirit, pervaded by a sharp intellect, a capacity for fine observation and a sense of humour typical of the women political prisoners at Barberton. A crucial theme in Neame’s account is the question of whether something positive emerged out of her experience and, if so, what exactly it was.

Sylvia Neame was a political activist and member of the South African Communist Party. She was given a four-year sentence under the Suppression of Communism Act in 1965 (with two two-year sentences to run concurrently) and was afterwards also tried in Humansdorp (on a charge of advocating violence) but was acquitted on appeal. After being released from Barberton Prison in 1967 she left South Africa on an exit permit and subsequently lived in Britain for four years, then in Germany.

COMING SOON!!! #Imprisoned The experience of a prisoner under apartheid, by Sylvia Neame. pic.twitter.com/mCtVZcXDxq