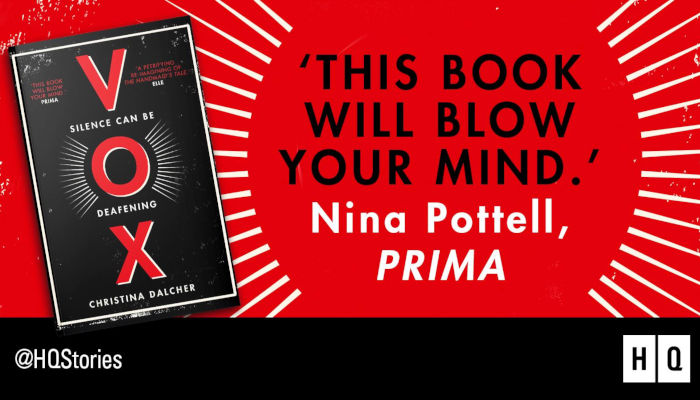 Set in a United States in which half the population has been silenced, Vox is the harrowing, unforgettable story of what one woman will do to protect herself and her daughter.

Silence can be deafening.

Jean McClellan spends her time in almost complete silence, limited to just one hundred words a day. Any more, and a thousand volts of electricity will course through her veins.

Now the new government is in power, everything has changed. But only if you’re a woman.

Almost overnight, bank accounts are frozen, passports are taken away and seventy million women lose their jobs. Even more terrifyingly, young girls are no longer taught to read or write.

For herself, her daughter, and for every woman silenced, Jean will reclaim her voice. This is only the beginning …

Christina Dalcher earned her doctorate in theoretical linguistics from Georgetown University, specialising in the phonetics of sound change in Italian and British dialects. She and her husband split their time between the American South and Naples, Italy. Vox is her debut novel.

A petrifying reimagining of The Handmaid’s Tale in the present, and a timely reminder of the power and importance of language.
– Marta Bausells, ELLE

This book will blow your mind.
– PRIMA

Vox is intelligent, suspenseful, provocative, and intensely disturbing – everything a great novel should be.
– Lee Child

I can’t remember the last time I read a book quite this thrilling. Vox is, like all the best dystopian novels, razor sharp and terrifyingly plausible. It is extraordinary.
– Louise O’Neill

Thought-provoking and thrilling. I was left speechless!
– Woman and Home