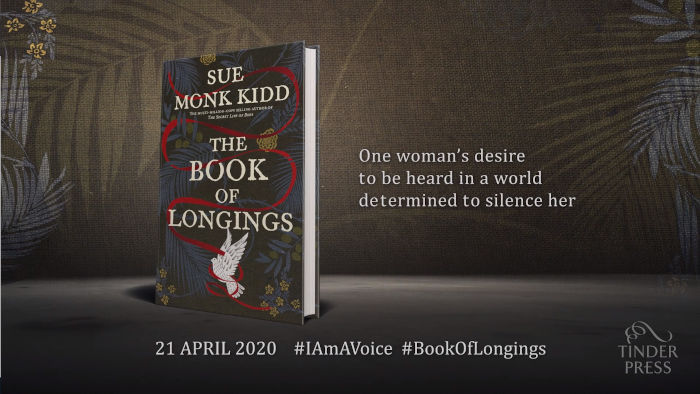 So begins The Book of Longings, the exquisitely written new novel from Sue Monk Kidd, the bestselling author of The Secret Life of Bees and The Invention of Wings.

Ana is a rebellious young woman, a gifted writer with a curious, brilliant mind, who writes secret narratives about the neglected and silenced women around her. Raised in a wealthy family in Galilee, she is sheltered from the brutality of Rome’s occupation of Israel. Ana is expected to marry an elderly widower to further her father’s ambitions, a prospect that horrifies her. A chance encounter with the eighteen-year-old Jesus changes everything: his ideas and his passion are intoxicating.

Taking Ana on a journey she could never have imagined, The Book of Longings is a glorious evocation of a time and a place where astounding events unfolded, and of one woman’s fate when she fights to make her voice heard.

Kidd is also the author of several acclaimed non-fiction books including the bestselling Travelling With Pomegranates, which she co-wrote with her daughter Ann Kidd Taylor. Other non-fiction works include When the Heart Waits and The Dance of The Dissident Daughter.

Sue lives in North Carolina with her husband Sandy.

I am Ana. I was the wife of Jesus ben Joseph of Nazareth. I called him Beloved and he, laughing, called me Little Thunder. He said he heard rumblings inside me while I slept, a sound like thunder from far over the Nahal Zippori valley or even farther beyond the Jordan. I don’t doubt he heard something. All my life, longings lived inside me, rising up like nocturnes to wail and sing through the night. That my husband bent his heart to mine on our thin straw mat and listened was the kindness I most loved in him. What he heard was my life begging to be born.

My testament begins in the fourteenth year of my life, the night my aunt led me to the flat roof of my father’s grand house in Sepphoris, bearing a plump object wrapped in linen.

I followed her up the ladder, eyeing the mysterious bundle, which was tied on her back as if it were a newborn baby, unable to guess what she secreted. She was humming a Hebrew song about Jacob’s ladder, doing so rather loudly, and I worried the sound would tumble through the slit windows of the house and awaken my mother. She had forbidden us to go to the roof together, afraid Yaltha would fill my head with audacities.

Unlike my mother, unlike every woman I knew, my aunt was educated. Her mind was an immense feral country that spilled its borders. She trespassed everywhere. She had come to us from Alexandria four months ago for reasons of which no one would speak. I’d not known my father had a sister until she’d appeared one day dressed in a plain, undyed tunic, her small body erect with pride, eyes glowering. My father didn’t embrace her, nor did my mother. They gave her a servant’s room that opened onto the upper courtyard, and they ignored my interrogations. Yaltha, too, avoided my questions. ‘Your father made me swear not to speak of my past. He would rather you think I dropped from the sky in the manner of bird shit.’

Mother said Yaltha had an impudent mouth. For once, we were in agreement. My aunt’s mouth was a wellspring of thrilling and unpredictable utterances. It was what I most loved about her.

Tonight was not the first time we’d sneaked to the roof after dark to escape prying ears. Huddled beneath the stars, my aunt had told me of Jewish girls in Alexandria who wrote on wooden tablets that contained multiple wax slates, contraptions I could scarcely imagine. She’d recounted stories of Jewish women there who led synagogues, studied with philosophers, wrote poetry, and owned houses. Egyptian queens. Female pharaohs. Great Goddesses.

If Jacob’s ladder reached all the way to heaven, so, too, did ours.

Yaltha had lived no more than four and a half decades, but already her hands were becoming knotted and misshapen. Her skin lay in pleats on her cheeks and her right eye drooped as if wilted. Despite that, she moved nimbly up the rungs, a graceful climbing spider. I watched as she hoisted herself over the top rung onto the roof, the pouch on her back swinging to and fro.

We settled on grass mats, facing each other. It was the first day of the month of Tishri, but the cool fall rains had not yet come. The moon sat like a small fire on the hills. The sky, cloudless, black, full of embers. The smell of pita and smoke from cook fires drifted over the city. I burned with curiosity to know what she concealed in her bundle, but she gazed into the distance without speaking and I forced myself to wait.

My own audacities lay hidden inside a carved cedar chest in a corner of my room: scrolled papyri, parchments, and scraps of silk, all of which bore my writings. There were reed pens, a sharpening knife, a cypress writing board, vials of ink, an ivory palette, and a few precious pigments my father had brought from the palace. The pigments were mostly gone now, but they’d been luminous the day I’d opened the lid for Yaltha.

My aunt and I had stood there gazing down at all that glory, neither of us speaking.

She reached into the chest and pulled out parchments and scrolls. Not long before she arrived, I’d begun writing down the stories of the matriarchs in the Scriptures. Listening to the rabbis, one would’ve thought the only figures worth mention in the whole of history were Abraham, Isaac, Jacob, and Joseph … David, Saul, Solomon … Moses, Moses, Moses. When I was finally able to read the Scriptures for myself, I discovered (behold!) there were women.

To be ignored, to be forgotten, this was the worst sadness of all. I swore an oath to set down their accomplishments and praise their flourishings, no matter how small. I would be a chronicler of lost stories. It was exactly the kind of boldness Mother despised.

On the day I opened the chest for Yaltha, I had completed the stories of Eve, Sarah, Rebekah, Rachel, Leah, Zilpah, Bilhah, and Esther. But there was so much remaining to be written – Judith, Dinah, Tamar, Miriam, Deborah, Ruth, Hannah, Bathsheba, Jezebel.

Tensed, almost breathless, I watched my aunt pore over my efforts.

‘It’s as I thought,’ she said, her face candescent. ‘You’ve been greatly blessed by God.’

Until that moment I’d thought I was merely peculiar – a disturbance of nature. A misfit. A curse. I’d long been able to read and write, and I possessed unusual abilities to compose words into stories, to decipher languages and texts, to grasp hidden meanings, to hold opposing ideas in my head without conflict.

My father, Matthias, who was head scribe and counselor to our tetrarch, Herod Antipas, said my talents were better suited for prophets and messiahs, for men who parted seas, built temples, and conferred with God on mountaintops, or for that matter, any common circumcised male in Galilee. Only after I taught myself Hebrew and cajoled and pleaded did he allow me to read the Torah. Since the age of eight, I’d begged him for tutors to educate me, scrolls to study, papyrus to write on, and dyes to mix my own inks, and he’d often complied – whether out of awe or weakness or love, I couldn’t say. My aspirations embarrassed him. When he couldn’t subdue them, he made light of them. He liked to say the only boy in the family was a girl.