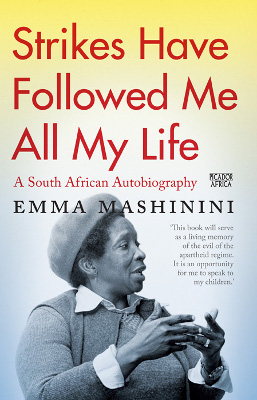 The feisty and inspirational Emma Mashinini has passed away at age 87. Emma’s memoir, Strikes Have Followed Me All My Life, was originally published by The Women’s Press UK in 1989 and republished by Picador Africa in South Africa in 2012 with a new foreword by Jay Naidoo.

She is regarded as the doyenne of the trade union movement in South Africa, serving as a shop steward on the National Union of Clothing Workers (NUCW) and a founder of the South African Commercial, Catering and Allied Workers Union (SACCAWU) in 1975. She was integrally involved in the establishment of the Congress of South African Trade Unions (Cosatu) in 1985. She played several prominent roles in the transition to democracy in the 1980s and 1990s.

It was a privilege to publish her book and to have her as an author on our list.