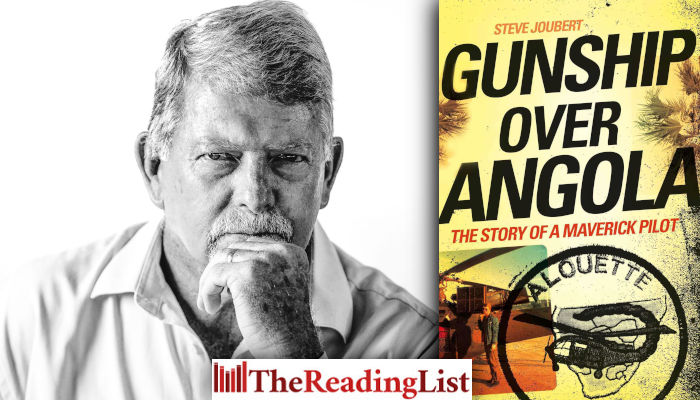 Gunship Over Angola: The Story of a Maverick Pilot by Steve Joubert is out now from Jonathan Ball Publishers.

Growing up in suburban Pretoria, Steve Joubert dreamed of a career as a pilot. After undergoing SAAF pilot training, a freak injury put an end to his hopes of flying fighter jets. Instead he learned to fly the versatile Alouette helicopter.

He had barely qualified as a chopper pilot when he was sent to the Border, where he flew missions over Namibia and southern Angola to supply air cover to troops on the ground. As a gunship pilot, Steve saw some of the worst scenes of war, often arriving first on the scene after a contact or landmine attack.

He also recalls the lighter moments of military life, as well as the thrill of flying. A born maverick, his lack of respect for authority often got him into trouble with his superiors.

His experiences affected him deeply, and led him eventually to question his role in the war effort. As the Border War escalated, his disillusionment grew.

This gripping memoir is a powerful plea for healing and understanding.

Steve Joubert reported for national service at the South African Air Force Gymnasium in January 1976 to follow his childhood ambition to become an Air Force pilot. He was awarded his Pilot’s Wings as a member of Pupil Pilot’s Course 1/77. This book is primarily about the years which followed when Joubert flew Alouette III gunships in the Border War as a member of 17 Squadron. He later flew Dakota DC3s at 44 Squadron before leaving the SAAF in 1985 to pursue a business career. Steve is married to Diane. Between them they have a daughter, four sons and three granddaughters.