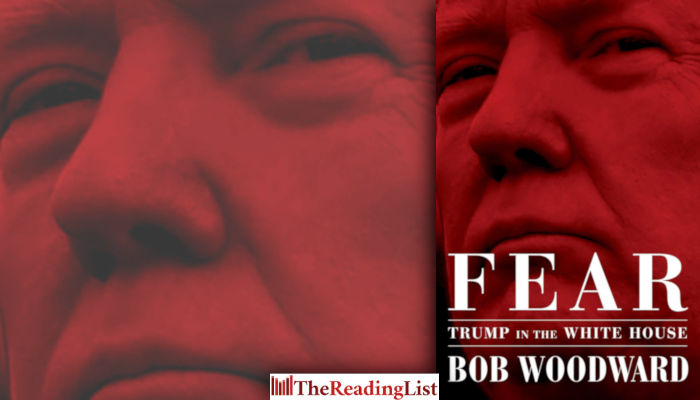 ‘The reality was that the United States in 2017 was tethered to the words and actions of an emotionally overwrought and unstable leader. Members of his staff had joined to purposefully block some of what they believed were the president’s most dangerous impulses. It was a nervous breakdown of the executive power of the most powerful country in the world.’
—from the Prologue to Fear

With authoritative reporting honed through eight presidencies from Nixon to Obama, Bob Woodward reveals in unprecedented detail the harrowing life inside Donald Trump’s White House and precisely how he makes decisions on major foreign and domestic policies.

Drawing from hundreds of hours of interviews with firsthand sources, contemporaneous meeting notes, files, documents and personal diaries, Fear brings to light the explosive debates that drive decision-making in the Oval Office, the Situation Room, Air Force One and the White House residence.

Bob Woodward is an associate editor at The Washington Post, where he has worked for 47 years. He has shared in two Pulitzer Prizes, first for the Post’s coverage of the Watergate scandal with Carl Bernstein, and second in 2003 as the lead reporter for coverage of the 9/11 terrorist attacks.

Fear is Woodward’s 19th book with Simon & Schuster, beginning with All the President’s Men in 1974. Each of the previous 18 books he authored or co-authored has been a national non-fiction bestseller. Twelve of those have been #1 national bestsellers.

Praise for Bob Woodward and Fear

‘An unprecedented inside-the-room look through the eyes of the President’s inner circle … A devastating portrait of a dysfunctional Trump White House.’
—Jamie Gangel, CNN

‘He is the master and I’d trust him over politicians of either party any day of the week.’
—Peter Baker, New York Times

‘His work has been factually unassailable … In an age of ‘alternative facts’ and corrosive tweets about ‘fake news,’ Woodward is truth’s gold standard.’
—Jill Abramson, The Washington Post

‘A harrowing portrait of the Trump presidency … Again and again, Woodward recounts at length how Trump’s national security team was shaken by his lack of curiosity and knowledge about world affairs and his contempt for the mainstream perspectives of military and intelligence leaders.’
—Phillip Rucker and Robert Costa, The Washington Post

‘This is not Fire and Fury redux. Or Omarosa 2.0. Rather, it is a sober account of how we reached this vertiginous point’
—The Guardian

‘Woodward … depicts the Trump White House as a byzantine, treacherous, often out-of-control operation … Mr Woodward’s book has unsettled the administration and the president in part because it is clear that the author has spoken with so many current and former officials.’
—Mark Landler and Maggie Haberman, New York Times

‘The more heartening message from Fear is that we still have institutions and individuals, including Bob Woodward, who will continue checking the most destructive instincts of Donald Trump.’
—Joe Scarborough

‘You can trust that Woodward has gone to inordinate lengths to get to the best obtainable version of the truth.’
—Mike Allen, Axios

‘I wonder how many journalists have arrived in Washington over the years dreaming of becoming the next Bob Woodward … Though his books are often sensational, he is the opposite of sensationalist. He’s diligent, rigorous, fastidious about the facts, and studiously ethical. There’s something almost monastic about his method … He’s Washington’s chronicler in chief.’
—Nick Bryant, BBC

‘I’ve been on the receiving end of a Bob Woodward book. There were quotes in it I didn’t like. But never once – never – did I think Woodward made it up. Anonymous sources have looser lips and may take liberties. But Woodward always plays is straight. Someone told it to him.’
—Ari Fleisher, White House Press Secretary for George W Bush

‘Woodward quoted me in his Clinton book saying all kinds of profane and rude things. Why? Maybe because he’s a Republican. Or maybe because: I. Said. Them.’
—Paul Begala, Counselor to President Bill Clinton

‘I’ve watched close-hand how Bob Woodward works and have learned from him for 41 years. He is a singularly meticulous gatherer of facts and documents and I would bet my life on his reliability. He is an American treasure.’
—David Maraniss, author of the bestselling Once a Great City

‘No, Bob Woodward is not a Democratic operative. He’s a highly respected journalist who has a track record of writing meticulously detailed books about presidents with an uncanny knack for getting behind-the-scenes details.’
—POLITICO Playbook

‘He’s got tapes. That’s what the Trump White House really did not understand until today, if they understand it even now.’
—Lawrence O’Donnell, MSNBC

‘Mr Woodward’s book has unsettled the administration and the president … The president has tweeted acclaim for Woodward multiple times, even criticising then-President Barack Obama’s administration for “attacking” the journalist. Trump’s tone changed after excerpts of Woodward’s latest book surfaced, and the White House has gone on the attack. If Woodward’s legacy alone weren’t enough, he also reportedly taped interviews and kept both documents and diaries of officials to validate claims in the book.’
—USA Today