External Mission: The ANC In Exile 1960-1990 by the late Stephen Ellis – the key to understanding South Africa today
More about the book! 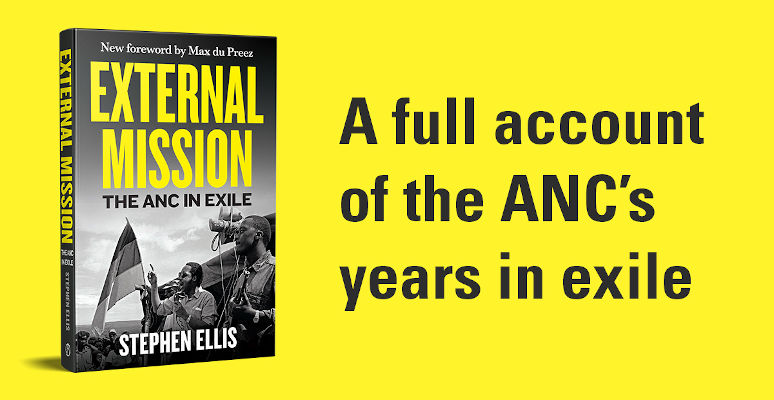 External Mission: The ANC In Exile 1960-1990 by the late Stephen Ellis is out now from Jonathan Ball Publishers.

After the ANC was banned by the apartheid government in 1960, many of its leaders and members were forced to leave the country. During the next three decades, it had to operate in exile and underground. Yet the real history of this period remains shrouded in mystery.

Some events, such as the Rhodesian campaign of 1967–1968 and the Kabwe conference of 1985, are well known, but lesser known are the intense factional struggles within the organisation, recurring pro-democracy protests and the creation of a security apparatus that inspired widespread fear. Some networks within the exiled ANC became heavily involved in corruption, even colluding with elements of the apartheid security police and secret services.

External Mission aims to provide a full account of the ANC’s years in exile, penetrating the secrecy the organisation erected around itself and testing the myths that emerged from that period. It is based on an exceptionally wide range of sources, including the ANC’s own archives and foreign archives such as those in East Germany, where the movement’s security personnel were trained.

The late Stephen Ellis was the Desmond Tutu professor in the Faculty of Social Sciences at the VU University Amsterdam, the Netherlands, and a senior researcher at the Afrika Studiecentrum in Leiden. In the late 1990s he worked as a researcher for the Truth and Reconciliation Commission in South Africa. He was a past editor of African Affairs, the journal of Britain’s Royal African Society and also worked as the editor of the newsletter Africa Confidential. In 2003–2004 he was director of the Africa programme at the International Crisis Group.