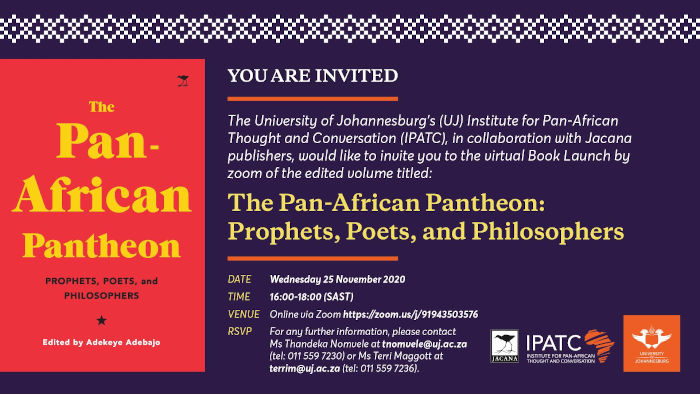 The University of Johannesburg’s Institute for Pan-African Thought and Conversation, in collaboration with Jacana Media, invite you to the virtual book launch of The Pan-African Pantheon: Prophets, Poets, and Philosophers.

Sir Hilary Beckles is a Professor and the Vice-Chancellor of the University of the West Indies (UWI). He is Vice-President of the International Task Force for the United Nations Educational, Scientific, and Cultural Organisation (Unesco) Slave Route Project; and an advisor to the UN Secretary-General on Sustainable Development. He is Chair of the Caribbean Community’s (Caricom) Commission on Reparation and Social Justice. He has lectured extensively in Europe, Africa, Asia and the Americas, and published over ten scholarly books, including Britain’s Black Debt: Reparations for Caribbean Slavery and Native Genocide; Natural Rebels: A Social History of Enslaved Women in Barbados; and The First Black Slave Society: Britain’s ‘Barbarity Time’ in Barbados, 1636-1876.

Professor Adekeye Adebajo is the Director of the Institute for Pan-African Thought and Conversation (IPATC) at the University of Johannesburg in South Africa. Professor Adebajo is the author of six books including Building Peace in West Africa; The Curse of Berlin: Africa after the Cold War; UN Peacekeeping in Africa; Thabo Mbeki: Africa’s Philosopher-King; and Essays on Nigeria and South Africa. He is co-editor or editor of nine books on Africa’s international relations. Professor Adebajo holds a doctorate from Oxford University in England, and is a columnist for Business Day (South Africa), The Guardian (Nigeria) and The Gleaner (Jamaica).

Professor Pearl T Robinson is an Associate Professor in the Department of Political Science at Tufts University in Massachusetts, US. She is a member of the US Council on Foreign Relations, and was previously President of the US African Studies Association; Director of Tufts University’s International Relations Programme; and a board member of Trans Africa. She has authored more than 40 articles and book chapters on African and African-American politics. She is co-author of Stabilizing Nigeria: Sanctions, Incentives, and Support for Civil Society; and Transformation and Resiliency in Africa.

The Institute for Pan-African Thought and Conversation was established at the University of Johannesburg in 2016 as one of its four flagship centres of excellence to conduct research. It also provides a forum for scholars, practitioners, and civil society actors across Africa and its Diaspora to dialogue and contribute to the rigorous production and dissemination of Pan-African knowledge. The Institute aims to promote original and innovative Pan-African ideas and critical dialogue in pursuit of global excellence in research and teaching, and to contribute actively to building an international profile for UJ on Pan-African issues.