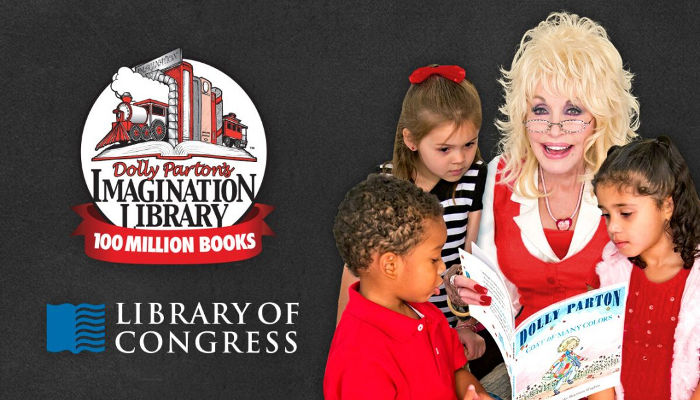 The Imagination Library mails free, high-quality books to children from birth until they begin school, no matter their family’s income, in participating communities within the United States, the United Kingdom, Canada and Australia.

Parton was inspired to start the Imagination Library as a tribute to her father, who was unable to read.

‘He was the smartest man I have ever known but I know in my heart his inability to read probably kept him from fulfilling all of his dreams.Inspiring kids to love to read became my mission.’

Parton dedicated the 100 millionth book, a special edition of her book Coat of Many Colors, to the United States Library of Congress collection.

The Imagination Library was launched in 1995 in Sevier County, Tennessee, where Parton grew up. By 2003, the programme had mailed one million books. Coverage was expanded to the whole of the United States in 2004, Canada in 2006, followed by the United Kingdom in 2007 and Australia in 2013.

‘I always like to say that 100 million books have led to 100 million stories,’ Parton says. ‘I am so honoured that our little programme has now grown to such a point that we can partner with the Library of Congress to bring even more stories to children across the country.’

Watch a video of the presentation: