Detective Kubu’s first case may also be his last – Facets of Death by Michael Stanley
More about the book! 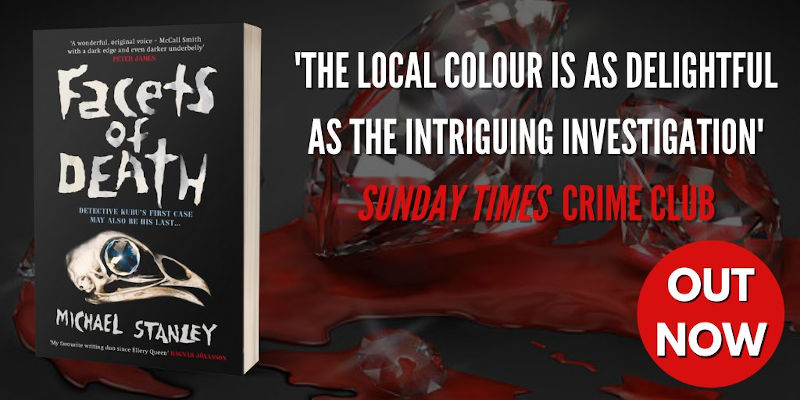 Facets of Death by Michael Stanley is out now from Jonathan Ball Publishers!

When a South African mine is robbed of 100,000 carats of diamonds and the thieves are murdered execution-style, Botswana’s Detective Kubu begins a terrifying international investigation.

Facets of Death is set in the late 1990s when Kubu first joins the Botswana CID as a raw detective. While he’s trying to be accepted by the current staff and to make a role for himself in the CID, a massive diamond heist takes place on the road from Jwaneng — home of the world’s richest diamond mine.

Everyone who knew the mine’s security plan is a possible suspect, including the director of the CID and the owners of the mine.

Does this young detective have the skill – and integrity – to engineer an international trap? Or could it cost him everything, including his life…

‘The perfect combination of “I don’t want it to end” and “I can’t put it down”. – Deon Meyer

Michael Stanley is the writing team of Michael Sears and Stanley Trollip. Both are retired professors who have worked in academia and business.

Sears is a mathematician, specializing in geological remote sensing. Trollip is an educational psychologist, specializing in the application of computers to teaching and learning, and a pilot. They were both born in South Africa.

On a flying trip to Botswana, they watched a pack of hyenas hunt, kill and devour a wildebeest, eating both flesh and bones. That gave them the premise for their first mystery, A Carrion Death, which introduced Detective ‘Kubu’ Bengu of the Botswana Criminal Investigation Department.

Free mini workshop with Anthea Gardner, investment specialist and author of Make Your Money Work For You, in Cape Town (11 July)

‘See stress as the advantage’ – Listen to Richard Sutton, author of The Stress Code, talk about how to manage stress

‘Do you think you funny?’ How Yusuf Daniels got his big break in publishing (his book Living Coloured is now a bestseller)