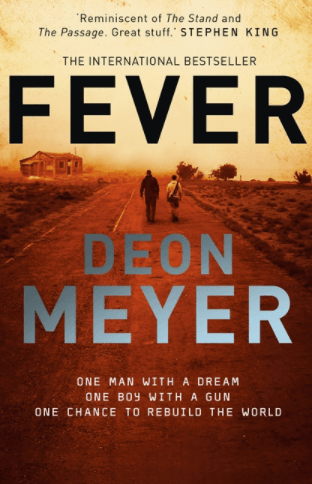 The Afrikaans edition, Koors, stayed at number one for some time last year, while the Dutch edition (published by AW Bruna) has shot into the Top 20 in the Netherlands.

Deon was the second highest best-selling author in South Africa last year, among all the international competition, second only to JK Rowling. Meyer-fever is spreading to other countries too, with Grove Atlantic set to publish in the US in September 2017. Joining them for the first time is Deon’s new Canadian publisher, House of Anansi, who will also publish Fever in September.

House of Anansi publisher Douglas Richmond says: ‘House of Anansi is thrilled to be Deon Meyer’s new Canadian publisher. Deon is a tremendously gifted writer with an uncanny talent for storytelling and world-building. In Fever, he has created a new masterpiece of dystopian fiction, which promises to be one of the most talked about books of the fall.’

Meyer is currently in the UK to launch Fever, and will also visit Holland, Spain, Germany and France.