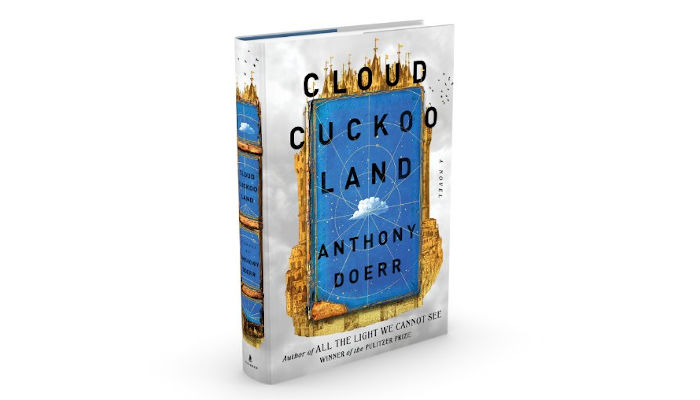 New book alert! Cloud Cuckoo Land, the new novel by Anthony Doerr, the author of the bestselling Pulitzer Prize winner All the Light We Cannot See, will be published in September 2021.

The book will be published by 4th Estate, an imprint of HarperCollins UK.

Doerr’s critically acclaimed 2014 novel All the Light We Cannot See sold 1.8 million copies in print, ebook and audio editions in British Commonwealth and 9.3 million copies worldwide, and was the winner of the 2015 Pulitzer Prize.

Cloud Cuckoo Land follows three storylines: Anna and Omeir, on opposite sides of the formidable city wall during the 1453 siege of Constantinople; teenage idealist Seymour and gentle octogenarian Zeno, in an attack on a public library in present day Idaho; and Konstance, on an interstellar ship bound for a distant exoplanet, decades from now.

A single copy of an ancient text – the story of Aethon, who longs to be turned into a bird so that he can fly to the paradise of Cloud Cuckoo Land – provides solace, mystery, and the most profound human connection to these five unforgettable characters. Like Marie-Laure and Werner in All the Light We Cannot See, Anna, Omeir, Zeno, Seymour, and Konstance are dreamers and misfits struggling to survive and finding resourcefulness and hope in the midst of peril.

‘The world we’re handing our kids brims with challenges: climate instability, pandemics, disinformation. I wanted this novel to reflect those anxieties, but also offer meaningful hope, so I tried to create a tapestry of times and places that reflects our vast interconnectedness — with other species, with each other, with the ones who lived before us, and the ones who will be here after we’re gone. Along the way, Cloud Cuckoo Land became a paean to libraries large and small, and to our species’ extraordinary capacity to transmit stories from generation to generation.’

‘For the millions of fans of All the Light We Cannot See, we are thrilled to announce that the wait is nearly over: Anthony Doerr’s new novel will be published on 28th September 2021. Cloud Cuckoo Land braids together characters across time – from the Siege of Constantinople to the present day and beyond – whose stories are completely absorbing. It is an astonishing novel of worlds within worlds, written on a grand scale but delicate and intimate and every bit as heart-wrenching as its predecessor.’

Anthony Doerr is the author of the Pulitzer Prize-winning novel All the Light We Cannot See, currently in development as a Netflix limited series. He is also the author of two story collections, Memory Wall and The Shell Collector; the novel About Grace; and the memoir Four Seasons in Rome, all published by Scribner.

He has won five O Henry Prizes, the Rome Prize, the New York Public Library’s Young Lions Award, the Andrew Carnegie Medal for Fiction, a Guggenheim Fellowship, and the Story Prize. Doerr lives in Boise, Idaho, with his wife and two sons.