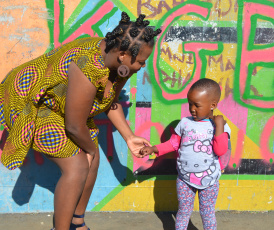 A children’s story by author Zukiswa Wanner has been translated into all 11 official South African languages for 2018 World Read Aloud Day, in a Nal’ibali initiative.

Since 2013, Nal’ibali, a national organisation that encourages reading for enjoyment, has encouraged South Africans to join in the global World Read Aloud Day campaign.

As 2017 wound down, South Africa heard news that broke our collective hearts. A report by Progress in International Literacy Study (PIRLS) alerted us that, in case you missed it, 78 percent of South African fourth graders cannot read for meaning in any language. This, despite education being one of the ministries that consistently gets a bigger chunk of the national budget annually. So where are we going wrong? […]

The aim this year is to have at least a million children participating in World Read Aloud Day. I ask all public figures, educators, parents, grandparents, aunts, uncles and cousins and all South Africans of goodwill, to take some time from their day on 1 February to commit to reading aloud to the children in their lives. Illiteracy will not end through taking part in the campaign, but it is a good way to start reducing it. More so, if those of us who take part in World Read Aloud Day commit to do it more frequently.

Nal’ibali provides free multilingual reading materials for children on their website, and encourages the formation of reading clubs throughout the country.

Wanner, who is based in Kenya, will be coming home for World Read Aloud Day on 1 February to read her story to 1,000 children in Soweto.

She has also committed to reading aloud to children at least once every fortnight from 1 February until 31 May, and interested people are encouraged to alert local reading clubs and libraries.

To join Nal’ibali’s World Read Aloud Day celebration, visit www.nalibali.org or www.nalibali.mobi, where you can download the special story and pledge the number of children to whom you will be reading it.

Wanner’s story is titled ‘The Final Whistle’, and is about a football-loving future Bafana Bafana star and his best friend, who hope to lead South Africa to World Cup triumph.

“I am going to score two goals today Dad, you will see,” Neo said as he put on one of his football boots.

“And I will assist in three goals, uncle,” Priya, who had just come in with her little brother Rahul, added.

Zukiswa Wanner is a literacy advocate and author of the children’s books, Jama Loves Bananas (Jacana 2011) and Refilwe (Jacana 2013). She’s also written six books for adults, one of them award-winning. She can be contacted via Facebook: @Zukiswa.Wanner