Cheslin Kolbe – the new book in the Road to Glory series for young readers by Jeremy Daniel
More about the book! 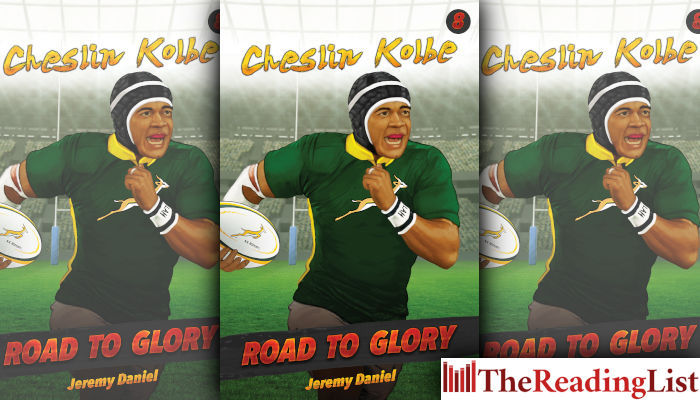 Cheslin Kolbe is the eighth book in the Road to Glory series, which covers South African sporting legends as they set out on their journeys to becoming national and international stars.

Written specifically for youngsters aged 10–14, it takes the reader close to all the action, and the ups and downs.

Cheslin roared with happiness as the final whistle blew on the field in Japan. They were champions! Later, as his captain lifted the 2019 Rugby World Cup trophy into the air, he had never felt prouder of himself, his team and his country.

Cheslin Kolbe tells the story of a kid from Kraaifontein, Cape Town, whose talent took him to international sports stardom, first to Toulouse France, and eventually to getting the call-up that would change his life forever: to play for the Springbok 2019 World Cup XV.

It’s a heartwarming story of a small player with a big heart whose signature side-step helped the Springboks win the World Cup trophy for South Africa.

Jeremy Daniel is an author, screenwriter and musician. He has written extensively for children’s television and theatre, including as head writer for Takalani Sesame. He is the author of the bestselling biography Siya Kolisi: Against All Odds. Back in the day, he was the founding member and bass player for seminal Cape Town indie band, Fetish. He lives in Cape Town with his wife and daughters.