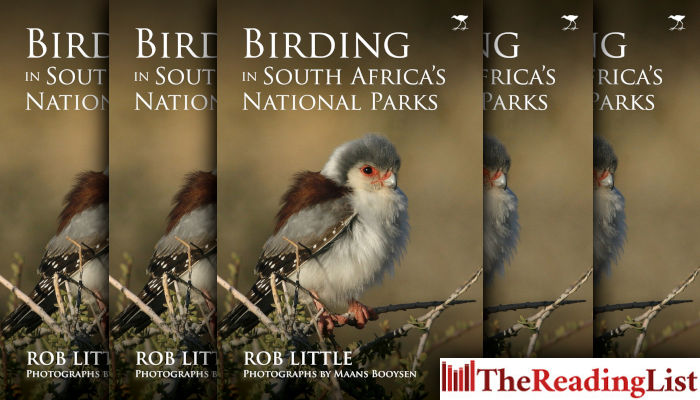 Birding in South Africa’s National Parks, by Rob Little with photography by Maans Booysen, is out now from Jacana Media.

The 19 featured national parks are grouped within the four biogeographic regions – northern, arid, frontier and Cape regions. Pertinent and interesting facts about where to find birds, including the top 10 birds of each park and a description of general habitats, are presented in a readable fashion.

‘This book offers a compact and concise introduction to birding in our parks, giving valuable insights into what species can be expected to be found in each park along with helpful guidance as to which habitats they may be associated with.’ – Dr Luthando Dziba, Managing Executive, Conservation Services Division, South African National Parks (SANParks)

Over 100 photographs illustrate some of the special birds found in the parks. Of the 700 regularly seen terrestrial species in South Africa, at least 640 can be found in the 19 national parks, with 13 of the 15 species endemic to South Africa and another 19 of the 20 species endemic to South Africa, Lesotho and Swaziland. The special birds listed at the back of the book for each park include iconic flagship species of the biome that the park represents, elusive birder’s bucket-list species and special southern African endemic species.

Birding in South Africa’s National Parks will be a worthy addition to the bookshelves of bird enthusiasts, particularly birders and ecotourists visiting South Africa from across the world.

Rob Little attained a PhD on behavioural ecology, management and utilisation of the grey-winged francolin from the University of Cape Town. Before that, he was a forester and warden of the Cathedral Peak mountain catchment reserve in the KwaZulu-Natal Drakensberg. Between 1988 and 1997, Rob coordinated the Gamebird Research Programme at the FitzPatrick Institute of African Ornithology, UCT. Rob was the conservation director at WWF South Africa between 1997 and 2008, and played a significant role in the establishment and expansion of the Namaqua, Table Mountain and Tankwa national parks.

In 2009 he was appointed manager of the DST-NRF Centre of Excellence at the Fitztitute, where he manages the research activities that use birds as keys to biodiversity conservation.

Maans Booysen was previously a farmer in the North West Province of South Africa on a farm which was incorporated into what is now Madikwe Game Reserve. Maans is an expert bird guide, having lead birding groups to many sites in Botswana, Mozambique, Namibia, South Africa, Zimbabwe and Zambia. He has also regularly compiled bird assessments for proposed renewable energy wind farm sites, done seabird transects on marine research vessels and participated on the birds component of National Geographic Okavango Wilderness Project excursions into Angola.

Maans has seen 894 bird species in southern African and has photographed 885 of those. Apart from his photographs appearing in Roberts’ and other electronic bird guide mobile applications, he also has 14 photographs in Terrestrial Gamebirds & Snipes of Africa (Little, 2016, Jacana Media) and 49 photographs in Birds of Namibia (Sinclair & Komen, 2017, Struik Nature).