Bill Clinton and James Patterson team up to write political thriller
More about the book! 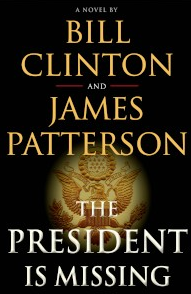 Bestselling author James Patterson is teaming up with former United States President Bill Clinton to write a new novel, The President Is Missing.

The book will be copublished by two of the Big Five trade houses, the Knopf Doubleday Publishing Group and the Hachette Book Group, and is scheduled to be released in June 2018.

Publishers Weekly reports that Clinton and Patterson met on a golf course about 10 years ago and have been friends since:

The publishers said the novel will be “informed by insider details that only a President can know.” For his part, Clinton said: “Working on a book about a sitting President—drawing on what I know about the job, life in the White House, and the way Washington works—has been a lot of fun.” Patterson said he has enjoyed the collaboration. “Working with President Clinton has been the highlight of my career, and having access to his first-hand experience has uniquely informed the writing of this novel.”