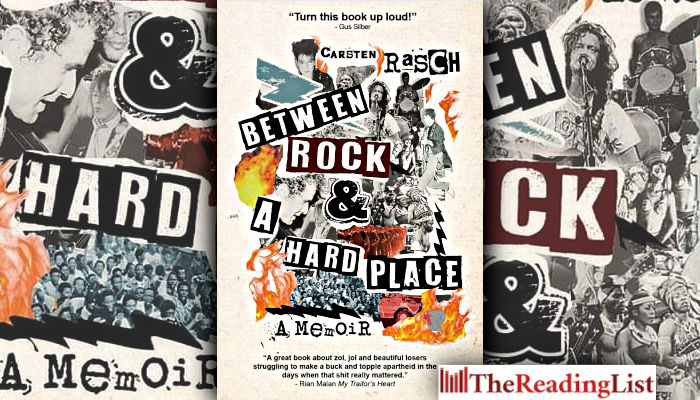 ‘This is history like you’ve never read it. Read it. You’ll laugh out loud.’
– Mike Nicol

‘A great book about zol, jol and beautiful losers struggling to make a buck and topple apartheid in the days when that shit really mattered.’
– Rian Malan, author of My Traitor’s Heart

The living room is packed, a sweaty crowd gathered in front of the impromptu stage, a wobbly affair of beer crates holding up sheets of board upon which Mapantsula are perched, ready to launch into their set. This is their commune, set in an acre of land in Sandton. Probably the largest gathering of its kind that year, this party lost control of itself hours ago.

The organisers never anticipated this kind of turnout. The crowd is spilling out onto the large patio, where dozens of beer-drinking hippies, punks, mods, ethnoids, lefties and a splattering of Rastas on the lookout for pussy are trying their best to make conversation, but inevitably end up just talking kak. Further afield, folk are lounging on the lawn or huddling around fires, smooching and/or tripping on LSD. A cloud of dagga smoke envelops the entire scene.

The ’80s in South Africa was a schmangled clusterfuck of a decade. Resistance against the apartheid government was mounting while violence swamped the beleaguered land. Change was undeniably in the air.

As the country heaved and hummed with resistant energy, in Joburg, Cape Town and Durban, tiny pockets of anti-apartheid whiteys were using music and parties to stage a punk-driven uprising against the tyrannical government. With guitars instead of guns and an insatiable hunger for freedom, the state saw this bizarre subculture as a hive of hedonists and drugged-up nihilists.

However, this anarchic collection of guitar-wielding, pill-munching, dope-smoking musicians and their followers were in fact a second front in the struggle against apartheid.

This is history like you’ve never read it. In brilliantly tragic and hilarious detail, Between Rock and a Hard Place is an epic memoir by musician, promoter and enthusiastic participant Carsten Rasch. Rasch is a gifted storyteller as he paints an untold history, detailing those tumultuous and giddy times with heartfelt irreverence. Veering between lucid moments of desperate innovation and psychotic adventures on the rim of sanity, all the time riding roughshod at delirious speeds over the potholes of ‘culture’, the reader is introduced to half-forgotten heroes, now fast disappearing into the fog of time, and the band of misfits who attempted to disrupt the system.

Between Rock and a Hard Place is simultaneously a blow-for-blow rock ’n roll story told from the dubious vantage point of being below the underbelly; an aberrant coming-of-age tale set in a time of political madness and mad debauchery; and, finally, a lesson on horses.

Carsten Rasch has been a camera operator, club owner, earring-maker, drummer, pizza maker, music promoter, film director and occasional dealer in illicit substances. He is presently a music curator and the drummer in the Hearts of Darkness, a band of unapologetically aging reprobates.