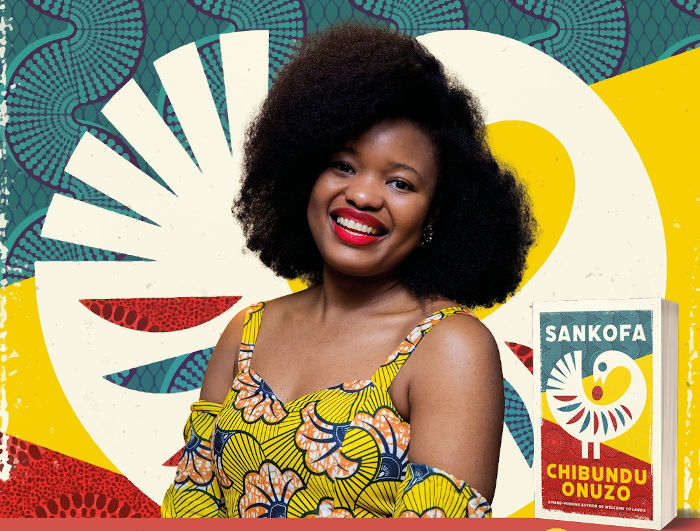 Sankofa – a funny, gripping and surprising story of a mixed-race British woman who goes in search of the West African father she never knew, by award-winning author Chibundu Onuzo – is out in July from Jonathan Ball Publishers.

The multitalented writer has also produced a single to launch her new novel.

‘A fantastic novel about a woman’s search for her personal, familial and national identity.’ – Sefi Atta

Anna grew up in England with her white mother and knowing very little about her West African father. In middle age, after separating from her husband and with her daughter all grown up, she finds herself alone and wondering who she really is. Her mother’s death leads her to find her father’s student diaries, chronicling his involvement in radical politics in 1970s London. She discovers that he eventually became the president – some would say the dictator – of Bamana in West Africa. And he is still alive.

She decides to track him down and so begins a funny, painful, fascinating journey, and an exploration of race, identity and what we pass on to our children.

‘Wonderful. Poignant and powerful and so timely and the beautiful ending had me in tears, reminding me to look within as well as without for my answers.’ – Stella Duffy

‘A hugely compelling novel about identity and the stories we tell about ourselves.’ – Anna James

Chibundu Onuzo was born in Lagos, Nigeria. Her life so far spans two military dictatorships, one internet revolution, two boarding schools, five grandmothers and a first book deal signed at 19. Chibundu’s first novel, The Spider King’s Daughter, was published by Faber in 2012 and was the winner of a Betty Trask Award, shorted for the Dylan Thomas Prize and the Commonwealth Book Prize and longlisted for the Desmond Elliott Prize and Etisalat Literature Prize. Her second novel, Welcome to Lagos, was published by Faber in 2017 and shortlisted for the RSL Encore Award. In 2018 Chibundu was elected as a Fellow of the Royal Society of Literature, as part of its ’40 Under 40′ initiative. She contributes regularly to the Guardian, has done a talk for TEDx and her autobiographical show 1991, featuring narrative, music, song and dance, premiered in a sell-out show at Southbank Centre’s London Literature Festival in 2018.