As You Like It, anthology featuring African LGBTQI+ voices and allies, wins international Lambda Literary Award
More about the book! 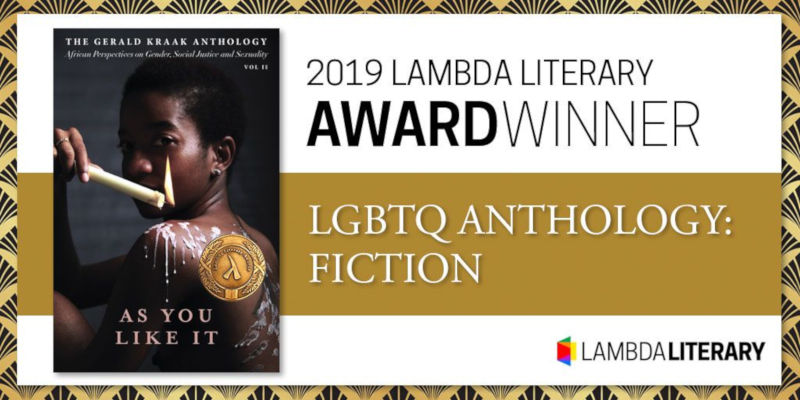 Jacana Media and the Other Foundation are thrilled to announce that the Gerald Kraak Anthology As You Like It has won the 2019 Lambda Literary Award for LGBTQ Anthology – Fiction.

The award was announced on 3 June 2019 at a glittering ceremony in New York.

‘Once again, the winners of this year’s Lambda Literary Awards demonstrate how LGBTQ writing is far from monolithic. Across twenty-four categories, one finds the range of queer brilliance and a whole new set of books for your to-read list.’

Bridget Impey, Publishing Director at Jacana Media, says: ‘We’re over the moon with this award, and just what it means for all the contributors.’

Created in honour of the late activist Gerald Kraak’s extraordinary legacy of supporting human rights, The Gerald Kraak Prize and Anthology advance his contribution to building a world that is safe and welcoming to all.

The unique award calls for multi-layered, brave and stirring African voices that represent a new wave of fresh storytelling, one that provokes thought on the topics of gender, social justice and sexuality. The judging panel for the 2018 prize included head judge Sisonke Msimang, writer, storyteller and author of Always Another Country; Mark Gevisser, one of South Africa’s leading authors and journalists; and Professor Sylvia Tamale, a leading African feminist who teaches law at Makerere University in Uganda.

The winner of the 2019 edition of the prize was OluTimehin Adegbeye, for her essay ‘Mothers and Men’. You can read her essay here.

The second Gerald Kraak Anthology, As You Like It, is a collection of the shortlisted entries submitted for the Gerald Kraak Prize. It showcases some of the most provocative works of fiction, poetry, journalism, photography and academic writing created by allies of the LGBTQI+ community – all fierce defenders of human rights. The existence of this anthology is an act of protest, affirmation and love for queer Afro-modernists everywhere.

Samuel Shapiro, who manages the production of the publication at the Other Foundation, says: ‘The Other Foundation is proud of the brave and insightful contributors to As You Like It, published in honour of the legacy of our founding figure Gerald Kraak. With the remarkable judges that select the entries for publication in the anthology, they are at the forefront of constructing an authentic African narrative for the freedom and equality of African homosexual and bisexual women and men, and transgender and intersex people.

‘This award propels their – and our – vision for a better future closer to becoming a reality.’

Along with the 25 book Lambda Literary Award winners, three special honours were also given to Alexander Chee, Masha Gessen, and Barbara Smith. Alexander Chee received Lambda’s Trustee Award for his immeasurable contributions to culture as a novelist, essayist, activist, and teacher. Masha Gessen received the Visionary Award for their work advancing public awareness around the global threat of totalitarianism. Barbara Smith received the Publishing Professional Award for a lifetime of work that has profoundly shaped our collective understanding of the interconnections between race, class, and gender.