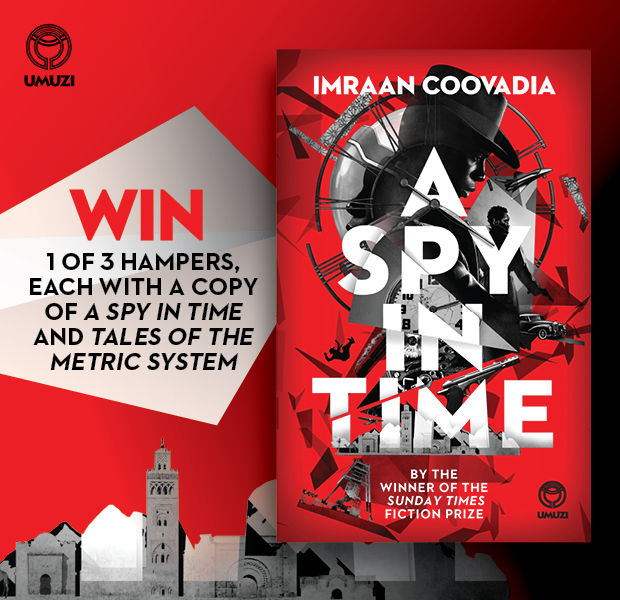 Win a copy of Imraan Coovadia’s new book, A Spy in Time, as well as Tales of the Metric System, courtesy of Umuzi!

Tales of the Metric System was shortlisted for the 2015 Sunday Times Barry Ronge Fiction Prize and longlisted for the International Dublin Literary Award, the ‘world’s richest literary prize’.

About A Spy in Time

Making sure the end of the world never happens again – that is Enver Eleven’s task. A spy for the Historical Agency, Enver is based in Johannesburg, the only city to survive – thanks to its mining tunnels – when a supernova hit. In Enver’s Joburg time-travelling agents jump between the past and future, searching for an elusive enemy plotting against the Agency. Enver’s mission starts off on shaky ground: when his mentor Shanumi Six disappears, Enver must prove that he is no double agent, an allegation as frightening as a white skin in a world where it has become vanishingly rare. But if you could go back and change the past, would the future turn out the way you want it to? Imraan Coovadia’s dazzlingly original A Spy in Time is an extraordinary tale for extraordinary times.

Three winners will each receive a copy of A Spy in Time, and Tales of the Metric System!

To stand a chance of winning, simply complete the online competition form here.

The cut-off date for entries is 30 June 2018. Terms and Conditions apply.

Listen to Maye Musk reading an excerpt from her new memoir, A Woman Makes a Plan