‘Among themselves, doves fight as often as hawks’ – Read an excerpt from Where the Crawdads Sing by Delia Owens
More about the book! 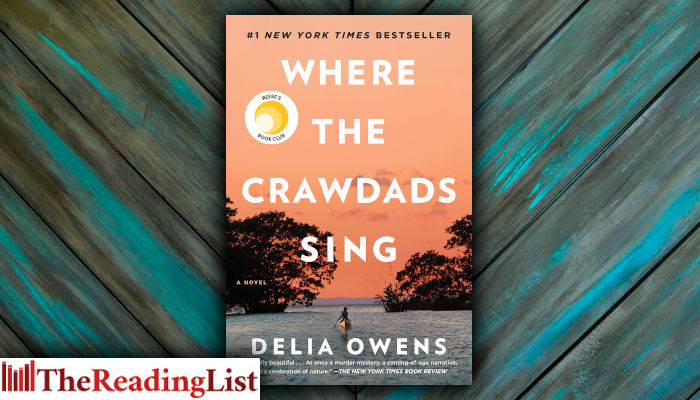 Read an excerpt from the novel everyone is talking about – Where the Crawdads Sing by Delia Owens, out now from Jonathan Ball Publishers.

For years, rumours of the ‘Marsh Girl’ have haunted Barkley Cove, a quiet town on the North Carolina coast. So in late 1969, when handsome Chase Andrews is found dead, the locals immediately suspect Kya Clark, the so-called Marsh Girl.

But Kya is not what they say. Sensitive and intelligent, she has survived for years alone in the marsh that she calls home, finding friends in the gulls and lessons in the sand. Then the time comes when she yearns to be touched and loved. When two young men from town become intrigued by her wild beauty, Kya opens herself to a new life – until the unthinkable happens.

Perfect for fans of Barbara Kingsolver and Celeste Ng, Where the Crawdads Sing is at once an exquisite ode to the natural world, a heartbreaking coming-of-age story, and a surprising tale of possible murder. Owens reminds us that we are forever shaped by the children we once were, and that we are all subject to the beautiful and violent secrets that nature keeps.

The morning burned so August-hot, the marsh’s moist breath hung the oaks and pines with fog. The palmetto patches stood unusually quiet except for the low, slow flap of the heron’s wings lifting from the lagoon. And then, Kya, only six at the time, heard the screen door slap. Standing on the stool, she stopped scrubbing grits from the pot and lowered it into the basin of worn-out suds. No sounds now but her own breathing. Who had left the shack? Not Ma. She never let the door slam.

But when Kya ran to the porch, she saw her mother in a long brown skirt, kick pleats nipping at her ankles, as she walked down the sandy lane in high heels. The stubby-nosed shoes were fake alligator skin. Her only going-out pair. Kya wanted to holler out but knew not to rouse Pa, so opened the door and stood on the brick-‘n’-board steps. From there she saw the blue train case Ma carried. Usually, with the confidence of a pup, Kya knew her mother would return with meat wrapped in greasy brown paper or with a chicken, head dangling down. But she never wore the gator heels, never took a case.

Ma always looked back where the foot lane met the road, one arm held high, white palm waving, as she turned onto the track, which wove through bog forests, cattail lagoons, and maybe-if the tide obliged-eventually into town. But today she walked on, unsteady in the ruts. Her tall figure emerged now and then through the holes of the forest until only swatches of white scarf flashed between the leaves. Kya sprinted to the spot she knew would bare the road; surely Ma would wave from there, but she arrived only in time to glimpse the blue case-the color so wrong for the woods-as it disappeared. A heaviness, thick as black-cotton mud, pushed her chest as she returned to the steps to wait.

Kya was the youngest of five, the others much older, though later she couldn’t recall their ages. They lived with Ma and Pa, squeezed together like penned rabbits, in the rough-cut shack, its screened porch staring big-eyed from under the oaks.

Jodie, the brother closest to Kya, but still seven years older, stepped from the house and stood behind her. He had her same dark eyes and black hair; had taught her birdsongs, star names, how to steer the boat through saw grass.

‘You told me that fox left her babies.’

‘Yeah, but that vixen got ‘er leg all tore up. She’d’ve starved to death if she’d tried to feed herself ‘n’ her kits. She was better off to leave ’em, heal herself up, then whelp more when she could raise ’em good. Ma ain’t starvin’, she’ll be back.’ Jodie wasn’t nearly as sure as he sounded, but said it for Kya.

Her throat tight, she whispered, ‘But Ma’s carryin’ that blue case like she’s goin’ somewheres big.’

The shack sat back from the palmettos, which sprawled across sand flats to a necklace of green lagoons and, in the distance, all the marsh beyond. Miles of blade-grass so tough it grew in salt water, interrupted only by trees so bent they wore the shape of the wind. Oak forests bunched around the other sides of the shack and sheltered the closest lagoon, its surface so rich in life it churned. Salt air and gull-song drifted through the trees from the sea.

Claiming territory hadn’t changed much since the 1500s. The scattered marsh holdings weren’t legally described, just staked out natural-a creek boundary here, a dead oak there-by renegades. A man doesn’t set up a palmetto lean-to in a bog unless he’s on the run from somebody or at the end of his own road.

The marsh was guarded by a torn shoreline, labeled by early explorers as the ‘Graveyard of the Atlantic’ because riptides, furious winds, and shallow shoals wrecked ships like paper hats along what would become the North Carolina coast. One seaman’s journal read, ‘rang’d along the Shoar … but could discern no Entrance … A violent Storm overtook us … we were forced to get off to Sea, to secure Ourselves and Ship, and were driven by the Rapidity of a strong Current …

‘The Land … being marshy and Swamps, we return’d towards our Ship … Discouragement of all such as should hereafter come into those Parts to settle.’

Those looking for serious land moved on, and this infamous marsh became a net, scooping up a mishmash of mutinous sailors, castaways, debtors, and fugitives dodging wars, taxes, or laws that they didn’t take to. The ones malaria didn’t kill or the swamp didn’t swallow bred into a woodsmen tribe of several races and multiple cultures, each of whom could fell a small forest with a hatchet and pack a buck for miles. Like river rats, each had his own territory, yet had to fit into the fringe or simply disappear some day in the swamp. Two hundred years later, they were joined by runaway slaves, who escaped into the marsh and were called maroons, and freed slaves, penniless and beleaguered, who dispersed into the water-land because of scant options.

Maybe it was mean country, but not an inch was lean. Layers of life-squiggly sand crabs, mud-waddling crayfish, waterfowl, fish, shrimp, oysters, fatted deer, and plump geese-were piled on the land or in the water. A man who didn’t mind scrabbling for supper would never starve.

It was now 1952, so some of the claims had been held by a string of disconnected, unrecorded persons for four centuries. Most before the Civil War. Others squatted on the land more recently, especially after the World Wars, when men came back broke and broke-up. The marsh did not confine them but defined them and, like any sacred ground, kept their secrets deep. No one cared that they held the land because nobody else wanted it. After all, it was wasteland bog.

Just like their whiskey, the marsh dwellers bootlegged their own laws-not like those burned onto stone tablets or inscribed on documents, but deeper ones, stamped in their genes. Ancient and natural, like those hatched from hawks and doves. When cornered, desperate, or isolated, man reverts to those instincts that aim straight at survival. Quick and just. They will always be the trump cards because they are passed on more frequently from one generation to the next than the gentler genes. It is not a morality, but simple math. Among themselves, doves fight as often as hawks.