‘A cool new generation of spy novel’ – The Most Difficult Thing by Charlotte Philby
More about the book! 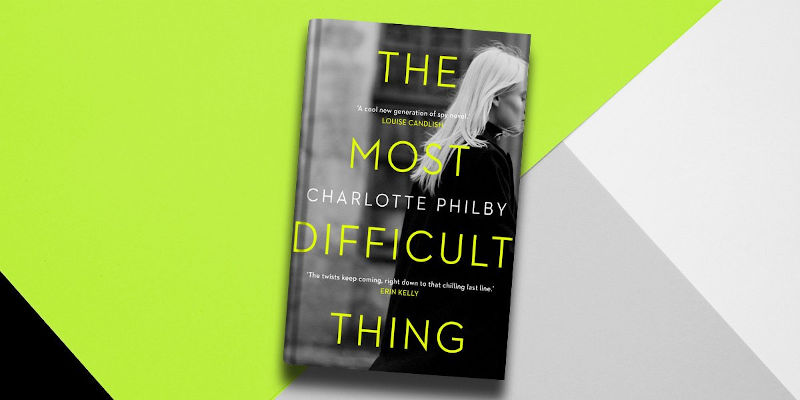 Stylish and assured, The Most Difficult Thing is an irresistible combination of contemporary espionage and domestic suspense, and a compulsive, highly charged examination of betrayal.

On the surface, Anna Witherall personifies everything the aspirational magazine she works for represents. Married to her university boyfriend David, she has a beautiful home and gorgeous three-year-old twin daughters, Stella and Rose. But beneath the veneer of success and happiness, Anna is hiding a dark secret, one that threatens to unravel everything she has worked so hard to create.

As Anna finds herself drawn into the dark and highly controlled world of secret intelligence, she is forced to question her family’s safety, and her own. Only one thing is certain: in order to protect her children, she must leave them, forever.

And someone is watching. Someone she thought she could trust. Someone who is determined to make them all pay.

‘[An] intriguing exploration of deceit and duplicity.’ – Guardian

‘I devoured this beautifully written, intricately wrought and unique blend of spy thriller and domestic suspense: The Most Difficult Thing is The Night Manager set in a woman’s world. The twists keep coming, right down to that chilling last line.’ – Erin Kelly, author of He Said/She Said, The Poison Tree and The Sick Rose

‘Dark and addictive and magnificent.’ – Joanna Cannon, author of The Trouble with Goats and Sheep and Three Things About Elsie

‘Charlotte Philby’s debut The Most Difficult Thing is an enigmatic and slippery beast, a cool new generation of spy novel. Just as the characters play cat and mouse with one another, so does the author with her readers – it’s a guessing game right to the end and I turned the last page with my heart pounding. Recommended.’ – Louise Candlish, author of Our House

Charlotte Philby worked for the Independent for eight years, as a columnist, editor and reporter, and was shortlisted for the Cudlipp Prize at the 2013 Press Awards for her investigative journalism. Founder of the online platform Motherland.net, she regularly contributes to the Guardian and iNews, as well as the BBC World Service, Channel 4 and Woman’s Hour. She has three children and lives in London. Charlotte is the granddaughter of Kim Philby, Britain’s most famous communist double-agent.

After the publication of 1984, George Orwell sent a copy to his high school French teacher, Aldous Huxley