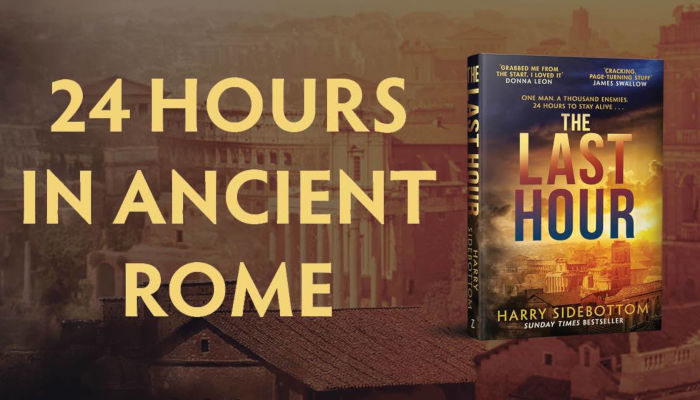 For readers of Bernard Cornwell, Ben Kane, Simon Scarrow and Conn Iggulden, The Last Hour is a thriller that will keep you on the edge of your seat.

Harry Sidebottom teaches Ancient History at Oxford University. His career as a novelist began with his Warrior of Rome series, which has sold over half a million copies.

The Last Hour, his tenth novel, introduces us once again to Marcus Clodius Ballista, hero of the Warrior of Rome books.

A lone figure stands silhouetted atop the Mausoleum of Hadrian. Behind him, the sun is setting over the centre of the known world. Far below, the river is in full flood. The City of Rome lies spread out before him on the far bank.

Footsteps pound up the stairs. He’s been set up. An enemy is closing in; he is cornered. He jumps.

Bruised and battered, he crawls out of the raging river. He is alone and unarmed, without money or friends, trapped in a deadly conspiracy at the heart of the Empire. The City Watch has orders to take him alive; other, more sinister, forces want him dead. As the day dies, he realises he has only 24 hours to expose the conspirators, and save the leader of the world.