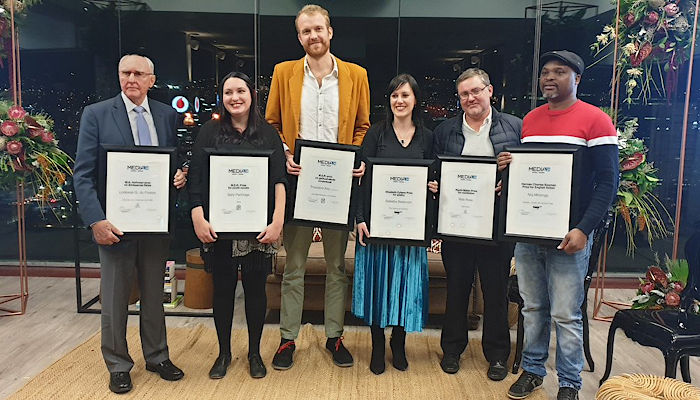 The annual awards recognise the best work published during the previous year by Media24 book publishers, including NB-Uitgewers/Publishers (through imprints such as Human & Rousseau, Tafelberg, Kwela Books and Queillerie) as well as Jonathan Ball Publishers.

This year, prizes to a combined value of more than R200,000 were awarded in six categories.

Rob Rose won the Recht Malan Prize for Nonfiction for Steinheist: Markus Jooste, Steinhoff and SA’s Biggest Corporate Fraud, published by NB Publishers under the Tafelberg imprint. According to the judges, Rose succeeded in not only documenting an instance of spectacular corporate fraud with great clarity, but in telling the story almost like a crime novel. ‘This excellent book will be used as a research resource for years to come and will serve as a benchmark to other investigative journalists,’ they said.

The other titles on the nonfiction shortlist were The Last Words of Rowan du Preez by Simone Haysom and Wit issie ’n colour nie by Nathan Trantraal.

The Herman Charles Bosman Prize for English Fiction went to Niq Mhlongo for Soweto, Under the Apricot Tree, a short story collection published by Kwela Books. The judges described the collection as a superior kind of storytelling by a skilful storyteller, with diverse stories, each one distinguished from the rest by way of subject matter, tone and narrative voice. ‘In this collection, Mhlongo shows that Soweto is not only that place south-west of Johannesburg, but extends into white spaces as well and potentially even beyond national borders. Soweto becomes a state of mind, a cultural phenomenon, a way of being.’

Also on the English fiction shortlist were The Ones with Purpose by Nozizwe Cynthia Jele and The Hum of the Sun by Kirsten Miller.

Gabeba Baderoon received the Elisabeth Eybers Prize for Afrikaans and English poetry for The History of Intimacy, published by Kwela Books. The judges said they were touched by the controlled lyricism and calm maturity of the poems in the collection. ‘The work depicts the transitions of Baderoon’s world, herself a figure of transit, and does this in a grammar that relies mainly on the strength of its images. It is a book of technical ease and linguistic subtlety of a high order.’

Former judge and debut novelist Andries Buys (80) received the WA Hofmeyr Prize for Afrikaans Fiction for Die dao van Daan van der Walt, written under the pseudonym Lodewyk G du Plessis and published by Tafelberg. It is the third prize awarded to Buys for the novel, which tells the life story of a former Kalahari farmer who finds himself in a Buddhist monastery in China. The other shortlisted titles were Die ongelooflike onskuld van Dirkie Verwey by Charl-Pierre Naudé and Die troebel tyd by Ingrid Winterbach.

The MER Prize for Youth Novels was awarded for a third time to Cape Town author Sally Ann Partridge, this time for Mine (Tafelberg). According to the judges, this bold, contemporary young adult novel steps into the world of teens so effortlessly and convincingly that the reader never doubts the authenticity of the story and characters – a rare feat for any author in this genre. ‘Mine is a captivating novel that can compete with some of the best voices in international teenage fiction,’ they said.

The other shortlisted YA novels were The Reject by Edyth Bulbring and Kraak by Rouxnette Meiring.