Read an excerpt from No Longer Whispering to Power, the new biography of Thuli Madonsela
More about the book! 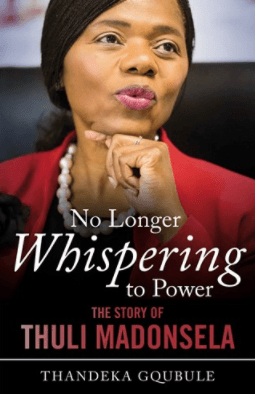 No Longer Whispering To Power: The Story of Thuli Madonsela is published by Jonathan Ball Publishers and written by journalist Thandeka Gqubule.

The excerpt covers the protest action in November 2016, which arose after Madonsela’s State of Capture report. Julius Malema had urged all South Africans to protest, and finance minister Pravin Gordhan was to go to court on the same day on charges of fraud.

‘By dusk on the day of rage,’ the excerpt reads, ‘it was clear that Madonsela had earned herself an indelible place in the story of post-apartheid South Africa.’

Also on the protestors’ agenda was a cause very dear to Madonsela’s heart, in which she had been involved with her daughter – the cause to support students at the country’s universities in their quest for free higher education.

The #Feesmustfall and #Zuptamustfall contingents both demanded President Zuma to step down, on the back of the findings of Madonsela’s State of Capture report. Anger spilled hot onto the streets of the capital, covered live on local television broadcasts. The international media dipped in, commenting and editorialising and carrying their stories to faraway lands, telling citizens of the world the story of how South Africans had fallen out of love with Jacob Zuma and in love with courageous, corruption-busting Thuli Madonsela.

To read the full excerpt, click on the link above.