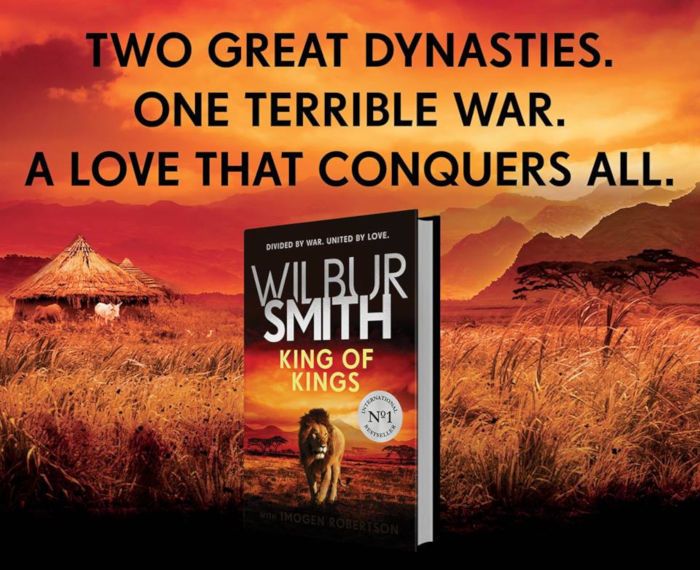 King of Kings brings together two of Wilbur Smith’s greatest families in the sequel to Triumph of the Sun.

The Courtneys and the Ballantynes meet again in a land torn between two powerful enemies.

King of Kings will be released in South Africa on 7 March 2019!

Cairo, 1887. A beautiful September day. Pernod Ballantyne and his fiancée, Amber Benbrook, stroll hand in hand. The future is theirs for the taking.

But when Penrod’s jealous former lover, Lady Agatha, plants doubt about his character, Amber leaves him and travels to the wilds of Abyssinia with her twin sister, Saffron, and her adventurer husband, Ryder Courtney. On a mission to establish a silver mine, they make the dangerous journey to the new capital of Addis Ababa, where they are welcomed by Menelik, the King of Kings.

Back in Cairo, a devastated Penrod seeks oblivion in the city’s opium dens. He is rescued by an old friend, who is now in the Italian army, and offered the chance to join the military efforts. Italy has designs on Abyssinia, and there are rumours of a plan to invade …

With storm clouds gathering, and on opposing sides of the invasion, can Penrod and Amber find their way back to one another – against all the odds?

King of Kings is an epic story of love, betrayal, courage and war that brings together two of Wilbur Smith’s greatest families.

Wilbur Smith is a global phenomenon: a distinguished author with a large and established readership built up over 55 years of writing with sales of over 130 million novels worldwide. Born in Central Africa in 1933, Wilbur became a full-time writer in 1964 following the success of When the Lion Feeds, and has since published 41 global bestsellers, including the Courtney Series, the Ballantyne Series, the Egyptian Se­ries, the Hector Cross Series and many successful standalone novels, all meticulously researched on his numerous expeditions worldwide. His books have now been translated into 26 languages.

‘Wilbur Smith is one of those benchmarks against whom others are compared.’
– The Times

‘Best historical novelist – I say Wilbur Smith, with his swashbuckling novels of Africa. The bodices rip and the blood flows. You can get lost in Wilbur Smith and misplace all of August.’
– Stephen King

‘Smith will take you on an exciting, taut and thrilling journey you will never forget.’
– The Sun

‘A thundering good read is virtually the only way of describing Wilbur Smith’s books.’
– Irish Times

Good with puzzles? Win £10,000 by cracking the code in a new series of books

Clouds In The Wind

Namwali Serpell chats to Efemia Chela about writing, and her upcoming novel