Don’t miss the virtual book launch of A Russian on Commando: The Boer War Experiences of Yevgeny Avgustus edited by Boris Gorelik (29 Sep)
More about the book! 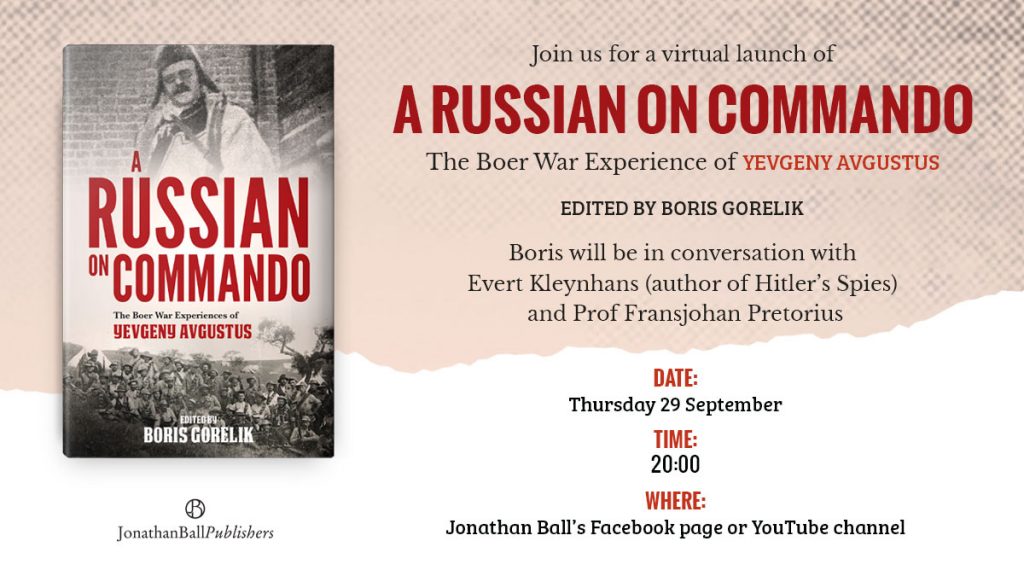 Join Jonathan Ball Publishers for the virtual launch of A Russian on Commando: The Boer War Experiences of Yevgeny Avgustus edited by Boris Gorelik.

Gorelik will be in conversation with Evert Kleynhans (author of Hitler’s Spies) and Prof Fransjohan Pretorius.

Avgustus and his companions joined the Krugersdorp Commando, and their experiences in the field are portrayed in vivid detail. The central part of this gripping account covers the Battle of the Tugela Heights in February 1900 and the Boers’ subsequent retreat. The immediacy of Avgustus’s writing captures his trepidation and excitement as he approaches the battle field for the first time, as well as his experience of life on commando.

The keen eye of this foreign volunteer brings to life a turning point in South African history. Avgustus is a gifted writer, and his narrative offers both acute observation and thoughtful introspection.

A gripping portrayal of human frailty and courage in the face of mortal danger, A Russian on Commando highlights both the strange attraction and the absurdities of war, illustrated with photos.