Don’t miss the launch of How To Steal a City: The Battle for Nelson Mandela Bay by Crispian Olver at Fogarty’s Bookshop
More about the book! 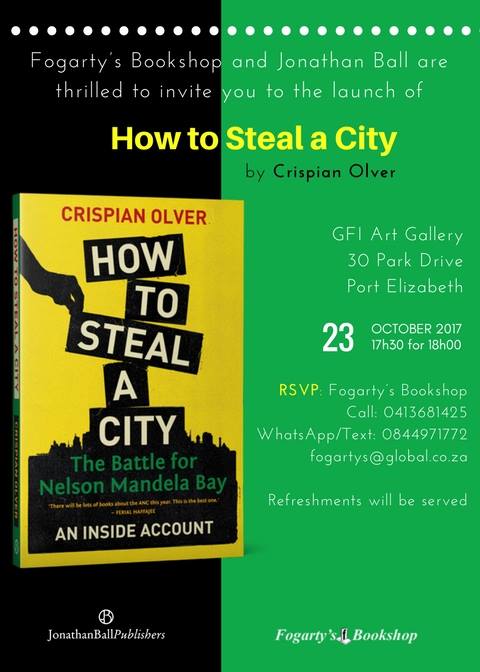 Fogarty’s Bookshop and Jonathan Ball Publishers invite you to the launch of How To Steal a City: The Battle for Nelson Mandela Bay – An Inside Account by Crispian Olver.

‘There will be lots of books about the ANC this year. This is the best one.’ – Ferial Haffajee

Olver qualified as a medical doctor in South Africa before joining government in 1994. In 2015 he headed up a regional task team set up by Pravin Gordhan with the aim of rooting out corruption in the Nelson Mandela Bay metro.

How to Steal a City is written as a gripping real-life thriller, taking the reader deeper and deeper into the rotten heart of the city. As a former senior government official and local government ‘fixer’, Crispian Olver was no stranger to dealing with dodgy politicians and broken organisations.

Yet what he found was graft that went far beyond the dodgy contracts, blatant conflicts of interest and garden-variety kickbacks he had seen before …

This is his story.