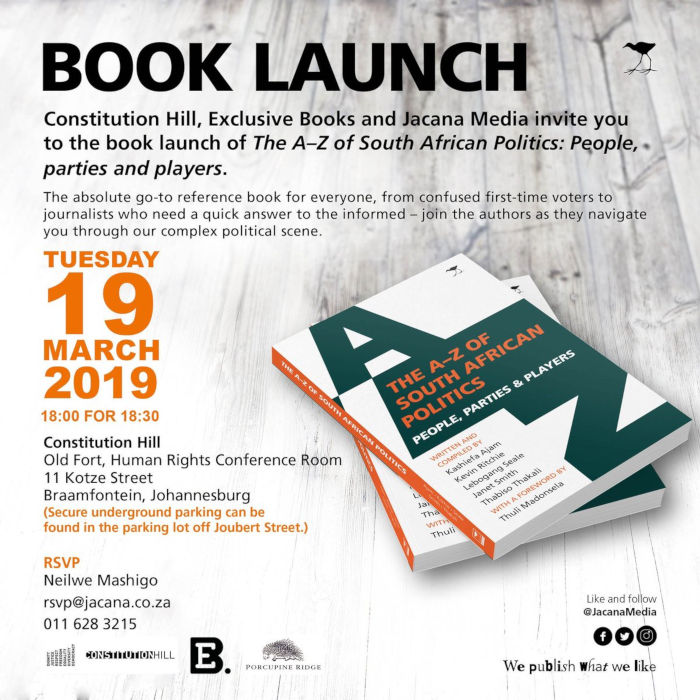 Constitution Hill, Exclusive Books and Jacana Media invite you to the book launch of The A to Z of South African Politics: People, Parties and Players.

The absolute go-to reference book for everyone, from confused first-time voters to journalists who need a quick answer, to the informed – join the authors as they navigate you through our complex political scene.

Puzzled by the difference between a coalition and confidence-and-supply? Confused about how McKinsey, Trillian and a bunch of corrupt individuals at Eskom fleeced the utility? Don’t know your Nhlapo Commission from your Moerane Commission?

The third edition of Jacana’s popular guide The A to Z of South African Politics has all the information you need to navigate your way through our complex political scene.

Highlighting the power brokers and stars as much as those who are on their way down or captured, this valuable quick research tool is for anyone interested in where South Africa is at − and why.

What are the links between the Auditor-General and the Asset Forfeiture Unit? Why do Black Twitter and its political influencers matter? Who are the diehard reds, and who switched from communism to capitalism? Who goes by the nickname of ‘Mkhuluwa’ (old man), and who as ‘His Excellency’?

South Africa is the only African country that is a member of the G20, but which bright minds represent it there and in other international arenas? The country is highly ranked in platinum, palladium and gold output, but which are the trade unions and who are the revolutionary leaders fighting on behalf of workers?

You’ll find those answers here too.

Everything you should know, starting with the shack-dwellers’ movement, Abahlali baseMjondolo, and ending at Jacob Zuma, is inside.