After the publication of 1984, George Orwell sent a copy to his high school French teacher, Aldous Huxley
More about the book! 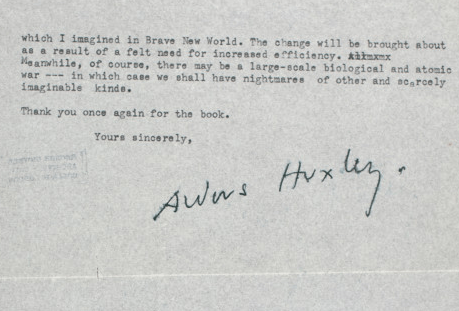 In October of 1949, a few months after 1984 was published, George Orwell sent a copy of the book to his high school French teacher, Aldous Huxley.

Huxley responded with a letter commending the book and contrasting it with his own Brave New World:

Within the next generation I believe that the world’s rulers will discover that infant conditioning and narco-hypnosis are more efficient, as instruments of government, than clubs and prisons, and that the lust for power can be just as completely satisfied by suggesting people into loving their servitude as by flogging and kicking them into obedience. In other words, I feel that the nightmare of Nineteen Eighty-Four is destined to modulate into the nightmare of a world having more resemblance to that which I imagined in Brave New World.

To read the full letter, click on the link above.