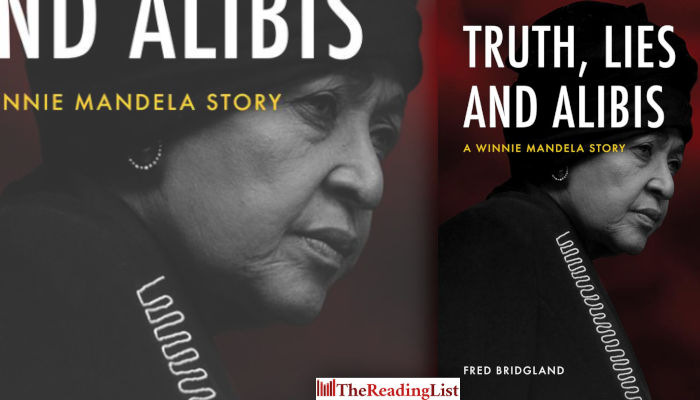 Update, 30/10/18, 3.30 pm: In response to Redi Tlhabi’s letter, Tafelberg has posted an apology on social media, and has announced that a new cover of Truth, Lies and Alibis will be released, with the quotations from Tlhabi, Sisonke Msimang, Palesa Morudu and Aubrey Matshiqi removed:

Tafelberg apologises unreservedly for causing distress with the quotations on the back cover of the recently released Truth, Lies and Alibis. We are in the process of making amends and are contacting the affected journalists. We are removing the quotations from the cover, issuing a rejacket and replacing the books on the shelves as soon as possible.

‘I AM APPALLED! HOW DARE YOU! HOW DARE YOU TAFELBERG!!!’ – Journalist and author Redi Tlhabi has hit out at Tafelberg Publishers for ‘underhand, dishonest’ conduct, after the publisher printed a quotation from her on the cover of Fred Bridgland’s new book on Winnie Madikizela-Mandela, Truth, Lies and Alibis.

The back cover of Truth, Lies and Alibis features quotations by Tlhabi, Sisonke Msimang, Palesa Morudu and Aubrey Matshiqi:

‘Winnie was a woman of her times, there was a war and she too was a soldier.’ – Redi Tlhabi, Sunday Times

‘Hers is a life worth examining for its courage, achievement and complexity.’ – Sisonke Msimang, Mail & Guardian

‘We do history a disservice if we omit the truth about the characters and events that shaped democratic SA. So, we must accept that Winnie Mandela was both a heroine and a villain.’ – Palesa Morudu, Business Day

‘… the story of Madikizela-Mandela is a story of many stories …’ – Aubrey Matshiqi, Business Day

Msimang and Morudu voiced their displeasure over the use of their words, which were sourced from articles in the media, earlier this month. Placed prominently on the book’s back cover, the quotes could be mistaken by general readers for ‘cover shouts’, which are specific, positive quotes commissioned by publishers from notable people to highlight the merits of a book’s contents.

Msimang called the move ‘a sneaky marketing effort’, and said she did not endorse Bridgland’s book, describing him an ‘apartheid apologist’. Morudu said she was ‘horrified’.

Tlhabi says Truth, Lies and Alibis ‘lacks nuance, empathy, complexity and a sense of history’, and is ‘the antithesis of what I believe and the complexity that I embrace when analysing historical figures’. She says the implication that she has endorsed the book is a ‘nefarious, dishonest tactic’ and takes the publisher to task for not contacting her ahead of the book’s publication to discuss the use of her quotation. Scroll down for Tlhabi’s complete statement, which was issued on WhatsApp earlier today.

It has come to my attention that a new book about #WinnieMandela written by an apartheid apologist has a blurb on the back taken from an article I wrote in the M&G. This is a sneaky marketing effort and I do not endorse the book. I will be writing to the publishers formally.

I have also checked with @BDliveSA to see if anyone gave Tafelberg Publishers any permission to use a quote from my column as ‘shout out’ for this book. I haven’t read the book. I am horrified that a quote from my Winnie column is used as a ‘shout out’. https://t.co/EgAlPhoKBq

Tafelberg, an imprint of NB Publishers, apologised on Twitter and said the sources were ‘clearly referenced’:

Tafelberg apologises for the perception that has been created. The intention of the quotations on the back cover of Truth, Lies and Alibis is to show that there is a multiplicity of views of Winnie Madikizela-Mandela – and Fred Bridgland’s book is one of them. They don’t endorse the book or author in any way but are about Madikizela-Mandela as a person and historical figure. The sources – opinion pieces in Sunday Times, Business Day and the M&G – are clearly referenced.

Read Redi Tlhabi’s letter to Tafelberg in full, shared with her permission:

I AM APPALLED! HOW DARE YOU! HOW DARE YOU TAFELBERG!!! You have been conniving and dishonest in appropriating a sentence from an entire article and placing it as a shout out for a book that YOU MUST HAVE KNOWN, was the antithesis of what I believe and the complexity that I embrace when analysing historical figures. In Fred Bridgland’s book on Winnie Madikizela Mandela, you take a sentence in an article I wrote, and place it prominently at the back of the book knowing that readers will assume it would be interpreted as a ‘blurb’ or a ‘shout out’. Even the most average reader would interpret a shout out as a statement of endorsement. People hardly write unkind shout-outs. It is not customary to spend time reading and writing shout- outs for writers who are not worthy of our time. A willingness to write a foreword or shout-out is an indirect endorsement and YOU KNOW THIS. So HOW DARE YOU!

I am not the only victim of your nefarious, dishonest tactic. Prominent writers and commentators like Sisonke Msimang, Aubrey Matshiqi and Palesa Morudu have been used by you in this most unprofessional and unkind manner. Why did you do it?

I ask this question because you have, over the years, always managed to find me, to ask me to write reviews and shout-outs for your authors. The most recent request from yourself was on Lukhanyo Calata’s book about his father, Fort Calata, My Father Died For This: A Story of the Calata Family. You had my email and Gill Moodie found me. It was only in January this year (2018). Why couldn’t you find me this time?

Let’s rewind the clock further. I wrote two shout-outs for you last year (2017), for very prominent and formidable South Africans, Professor Jonathan Jansen and Mark Heywood. My name and shout-outs are at the back of both Jansen and Heywood’s books. This was in 2017. You found me. Why couldn’t you find me this time?
Let’s go even way back. Judge Edwin Cameron’s Justice: A Personal Account. My name is on the front cover. And extract of my review is used quite prominently on the cover. I was on maternity leave when Tafelberg asked for my review. You found me. This was Judge Cameron and it was an honour for me to write about the impact of his story. You could not find me this time? You could. You just CHOSE not to.

So you (Tafelberg) and I, have a history. A history of mutual respect that led to you constantly seeking me out and me always saying yes, unless, as in Calata’s case, my time simply did not allow. Why did you not ask me this time around? I will tell you why. YOU KNEW I WOULD SAY NO. YOU KNEW IT. Because those of us who understand Winnie’s complexity, those of us who have transcended the ‘BOTH SIDES’ politically-correct argument and have a clear stance on who she is in history, would never put our names on a book that plays to a particular narrative about her. You knew this. So you got a group of respected black people to endorse your book, which lacks nuance, empathy, complexity and a sense of history.

Interestingly, between Morudu, Msimang and myself, we disagree passionately about who Winnie is and was. You have appropriated our writings and used them without the necessary context. Even more jarring for me, you bypassed all dictates of decency and decorum. You violated a relationship of mutual respect and abused my generosity. I have given you my time, read manuscripts when I had numerous deadlines, and yet, on this particular book, you just conveniently forgot to ask me? You knew I would say NO, and you knew WHY I would say NO. You went ahead and not only used my Sunday Times article without context but used an extract from my latest book Khwezi: The Remarkable Story of Fezekile Ntsukela Kuzwayo in the book to claim that the outcome of Winnie’s trial was a ‘triumph of law over justice’. My argument about ‘the triumph of law over justice’ in the Jacob Zuma rape trial, is completely misplaced and misused in Bridgland’s book. In YOUR book.

I guess in a bittersweet twist of irony, you have proved my point above. You did not do anything illegal. You did not break the law. And that is your defense, I guess. But you did break the moral code, the sense of right and wrong, you DID disrespect us. You behaved in an underhand, dishonest way. A real triumph of law over justice.

You knew where to find me. Why didn’t you do it? You knew which email address to use, which number to dial and which author in your stable to call, if you were struggling to find me. You did not do it. WHY? I know why. Because it was a book about Winnie Madikizela-Mandela. And like many who were not there, many who don’t come from our world, you were too busy cementing your politics. You were too sold on YOUR story, to ask us how we REALLY felt about her. SHAME ON YOU TAFELBERG!